After a hectic summer and fall we finally got packed up and hit the road.  I couldn’t believe how much work it was.  When I think about it, the last four years we were living in the trailer so it was just a matter of taking out a few things and off we went.  We are now in our apartment and it’s a whole different story.  It took three days to get ready this year.  We were both exhausted by the time we pulled out of the driveway in November.  We only made it to Missoula the first night but we were not in any hurry.  The next day we made it to Ogden, to Dale’s sister’s house.  It is always good to see them and their house is inundated with their children (who live next door), grandchildren (who live in the basement) and great grandchildren who come in and out.  It’s great fun but tiring.

I was hiding out in the trailer playing games on my computer when Eva, a ? year old knocked on my door.  She is a cute imp of a girl who is overflowing with questions.  I was showing her some pictures of the family on my computer.  I was telling her the names of the people and when I came to a picture of Pat.
I said, “ There’s  Pat”.
Eva looked up at me and said amazed, “Is that her name?”  I told her it was and she mouthed Pat a couple of times.  I asked her if she didn’t know that and she said no she didn’t.
I said, “You call her Grandma but what do you think I call her?”.
She said, “Grandma. Oh no, she’s not your grandma”
I said, “Right, I call her Pat cause that’s her name”.  She seemed both mystified and satisfied cause the next thing she asked me was how come my house was in a garage?  That took a bit more time to explain.

We left Ogden, taking our time going to Yuma.  We decided to go to Topaz Mountain and camp a few days since the weather was wonderful.  It feels more like summer than November.  We found a nice camping spot on the base of the mountain and settled in.  The next day, Dale took the truck and made the rough trip over to the Dugway Geode Beds, leaving around 9 am.  I did the dishes and gathered up a few things; water, juice, dried fruit, my camera and a rock pick and headed out to the UTV to go hunting for agates.

We had a map and a description to Agate Hill.  I was supposed to go 7 miles back on the road we came in on and watch for a road that turned south.  I was to follow that for 4.5 miles to the Hill.  Well, that wasn’t as easy as it sounded.  First of all, I couldn’t find the mileage meter on the UTV, but I thought I could just guess.  Then, there were lots of roads heading south.  So I picked one that looked promising and tried to find this agate place.  After looking around I decided that the directions weren’t specific enough.  I figured it was a nice little drive and I would head back to the trailer.

I drove back down the little road and somehow missed the turn and proceeded to get myself completely lost.  At that time I was still under the erroneous conviction that I could just go back a ways and correct my error.  But doing that just confused me more.  This is desert scrub and the place we parked  was up a draw with a mountain on each side.  There were very few trees and lots of rocks.  I kept driving until I found a draw with a mountain on both sides.  Unfortunately it wasn’t t my draw or my mountains.  So I turned around and went in search of the right one.  I quickly found out that all the draws looked the same.  Now what?

I realized that there were many more trees where I was now so that couldn’t be right.  I spotted a small hill in the distance and figured that I might see the lay of the and from up there.  I couldn’t recognize a thing.  I headed back down and decided to go right through the draw I the hopes I could find a road taking me back down to where we were parked.  I started up the draw on a pretty good UTV road which, as I travelled, got narrower and narrower.  I was now pinned on both sides by a 2 foot bank.  At one point I heard a loud bang but I couldn’t identify it.  The road got worse and worse until I was driving up a very narrow dry bed.  The banks were about 3 ft high and the old creek had several large rocks blocking the way.  I put the UTV in low range and crept over them successively and kept going.  Finally, I could see the last of the road but I was completely hemmed in.  I knew that I would have to turn around, if I could, and go back.  I decided to walk a bit ahead to see if there might be a wider spot for turning.  Just when I had given up hope I looked through the trees and saw a new road.  I went further and not only was it a road but a good, wide gravel road that must go somewhere. Walking back to the UTV, I realized that I was going to have scale that bank.  I went ahead a bit and the backed into the bank, put it in 4 wheel drive and low range and gunned it.  Up I went and landed on a flat spot with no rocks.  Eureka!!!  I was saved.  I crawled on to the road and took off in the direction that I guessed was the back end of the draw I wanted. It felt good to open up on a good road.  I went back down the draw and followed a smaller road down the canyon.  This place turned out to be beautiful.  A small dry bed wandered through the sage and cactus and made it’s way to the mouth of the draw about 3 miles.  But low and behold my hopes were dashed once again.  Wrong draw!!!!

I was not only devastated, but I had run out of ideas.  Up another hill I went and that view didn’t look familiar either.  So I gave in.  I turned off the UTV, got some apple chips and phoned Dale.  His voice mail went to a recording.  I left a message.
“Dale. I am helplessly lost and I really don’t know what to do.  I am staying put until someone rescues me.  Phone me when you get this message.”  I sat down to wait.  After waiting about 45 minutes and still no call, I thought I would look around on this hill for rocks to kill some time.  If no one came, my plan was to light a small fire in hopes anyone looking would see the smoke.  I did pick up some really nice agate.

I got bored waiting for a phone call that I now suspected was not reaching my rescuer. I fired up my ride and headed down the hill and into the maze of roads.  I took one at random and started following it.  I saw a fence post with tires hanging on it that I remembered seeing way back when I first turned to find the Agate Hill Road.  I followed it until I recognized another road.  Now I knew where I was even though I was about  8 miles from home.  But what a relief!

I quickly boogied down the road which got wider and wider. Until I turned into the right draw and drove right up to our trailer.  By now I was covered in dust and my hair was hard with dirt.  I ran into the trailer and jumped into the shower.

Emerging some time later a new woman.  I had been on the road for 4 hours and put over thirty five miles on the UTV according to my husband who arrive several hours later.  He had been out of cell range so didn’t get any of my frantic calls.  He had a blast getting geodes.  Thus is the life of being married to a rockhound.

And this is just the beginning of our trip, stay tuned.. 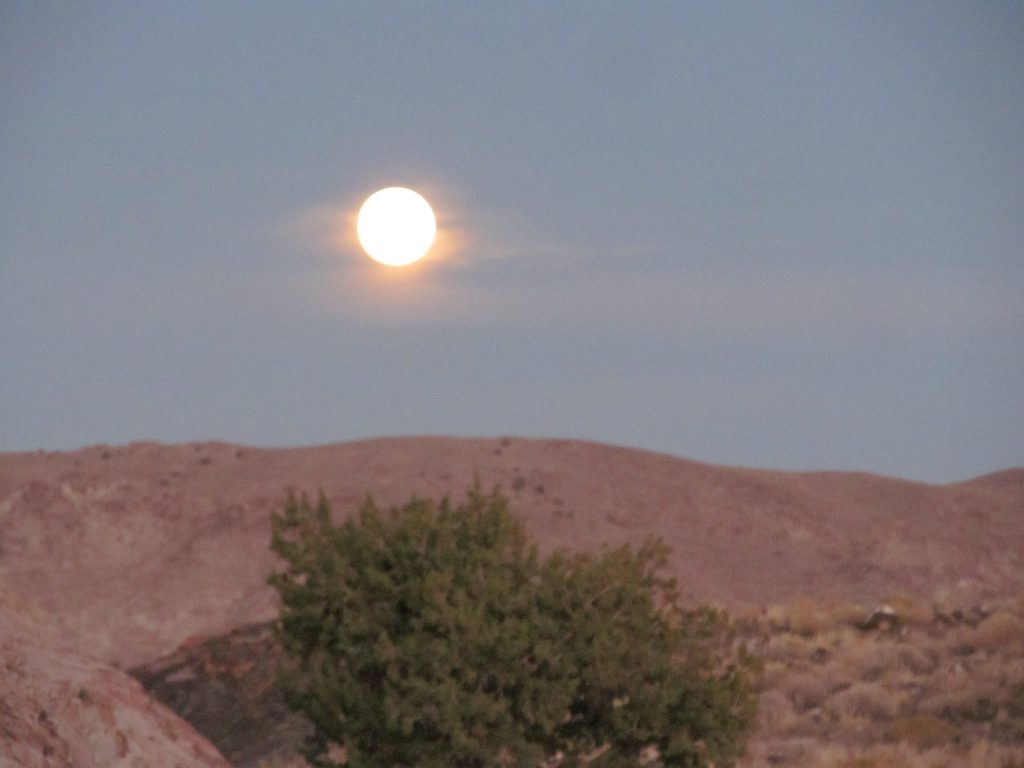 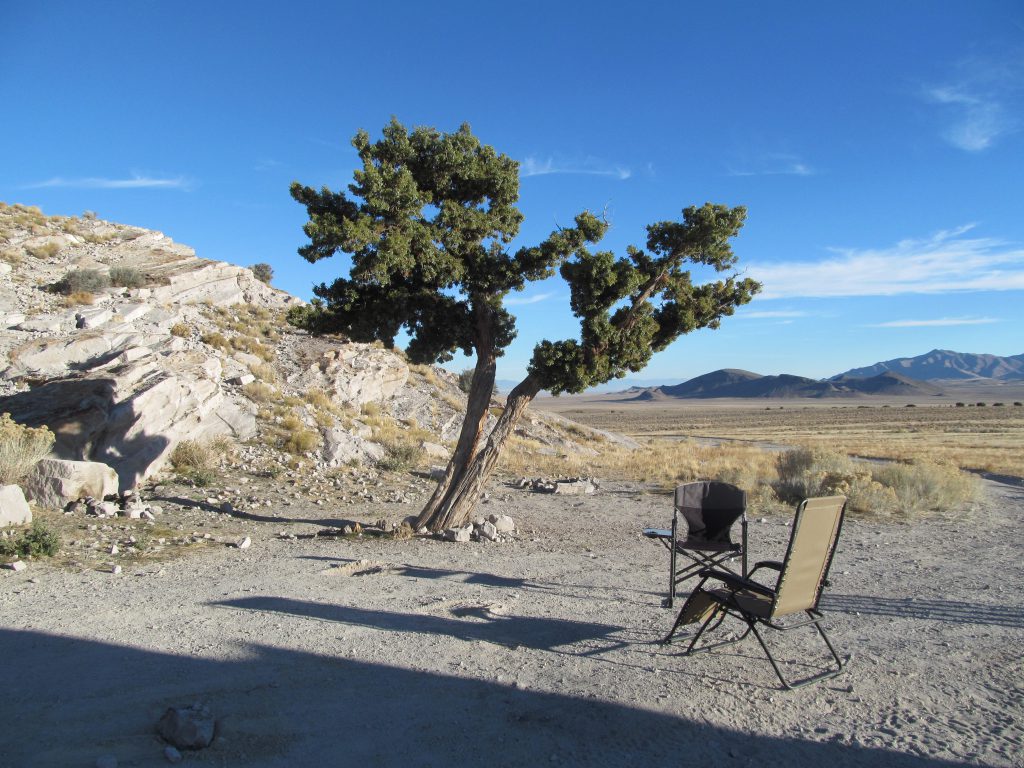 WERE YOU EXPECTING AN ADVENTURE SO  SOON?