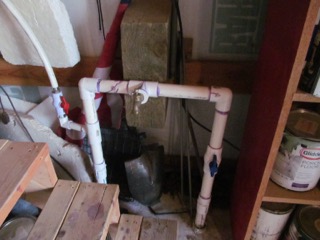 Contrary to popular belief, I don’t get into funny situations so I can have material for my blog, though, even I am starting to question it. Last Monday I was walking around surveying my kingdom, when I noticed  a pile of flat rocks from the construction next door.  It was just what I needed to finish covering the island in our driveway.  I would put down plastic and then these new-found rocks as weed control.  So I went into the garage and climbed the stairs to the storage area above the apartment.  We had a large roll of plastic that would do just fine.  It was heavy but I thought I could manage.  I started down stairs and quickly realized that this wasn’t going to work because the roll was too heavy. I started to turn back when the roll slipped out of my arms and went careening down the stairs.  It gained momentum and crashed into the plumbing that was sticking out of the wall at the bottom of the stairs.  What ensued could only be called a geyser.  Water was squirting everywhere. I ran through the spraying water and out the garage door to call Dale.  He was out clearing grass with his blower.  I yelled, but the noise was too loud.  I saw that the power cord was running right by me so I reached down and quickly pulled the plug.  When he looked up, I yelled for him to come.  He immediately saw the problem and reached for the shut off valve.  The problem was he had not gotten around to fixing the shut off since it has frozen and broke last winter.  So with some quick thinking, he jumped into the car and headed down to the well, down the hill to turn off the water.

Meanwhile back in the newly-made rainforest, I could see one fountain was hitting the drywall outside my laundry room. I grabbed an old wooden TV tray and put it down in front of the spray to divert it elsewhere.  I got the big push broom and started sweeping the water out the garage doors.  You may remember a former incident where I tried to sweep up a gallon of spilled paint and I realized that the concrete floor slants back away from the doors – don’t ask me why.   But I continued to push some of the water out just as it quit gushing as Dale had finally reached the shut off valve.

We spent the next hour getting the water out and the rugs dried.  Upon assessment of the damaged pipe Dale said he had to go to the store and get some repair supplies. I apologized again for causing all the trouble but he assured me that he should’ve fixed the shut off valve and he would have taken the pipe apart anyway.   That helped. 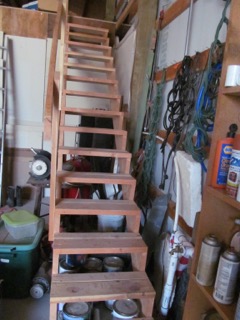 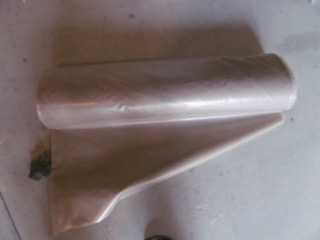 A Quiet Place to Sit

OK, THIS IS RIDICULOUS