Here I am post surgery, yes, it wasn’t the good news I hoped for. Yesterday at 5 am we got up and went to the outpatient surgery where a hour and a half later my familiar doctor reamed out my knee and cleaned up my two,yes count them, meniscus tears. Dale brought me home to the trailer where I spent my time groggy and hurting and getting waited on by both Dale and friends. By the end of the day and in spite of the pain pills, which I greedily took, I was still miserable. So Dale got me up to bed and all tucked in and I went restlessly to sleep. After what felt like half the night I woke up and struggled to the bathroom and found out I had been asleep for just about 90 minutes. Back to bed I went and spent the rest of the night waking with nightmares caused by the painkillers and slipping back into disturbed sleep. I woke up around 6 am and came downstairs planning to stay up. But after about a half and hour I got too cold and went back to bed where I slept deeply and dreamlessly for two more hours.

When I awoke I felt a great deal better and could even put weight on my leg. So it looks like this is going to be a ‘good day’.

Yesterday wasn’t the only bad day I had recently. About 5 days ago my day was a small disaster. First Dale beat me mercilessly in cards before I was hardly awake. Then I settled down at the computer vowing to seal a deal on an apartment in Nice where we will be going next August. I had been negotiating for days trying to get this job done. But with one thing or another I just couldn’t get my plans and my computers plans to agree. But today I was determined to get it done. Well three frustrating hours later I was still nowhere. I tried to book the apartment and all the information that was needed just seemed so illusive. Something as simple as our international country code was almost impossible to get. The phone book was useless, then I tried calling Verizon and after being on hold forever the operator said it wasn’t her area and she would have some other person get in touch with me, which she did and hour later. Then I entered it with hyphens and again it was rejected. Finally Dale came in and saw my tolerance level dropping dangerously and agreed to take over.

After going through the same routine for about an hour he managed to secure a booking, which he promptly put on our credit card. Which was REFUSED. If that happened to me I would have had a complete meltdown. But he persisted and eventually got an explanation. Our cards were cancelled yet again for a breach by some well used company and they were sending us out new cards, That’s just great cause we will never get them on the road, the post office will not forward them. So we got an extension and he was able to finalize the booking and change our mailing address so our cards would reach us.

I was totally flustered by this and because my knee was chronically hurting I decided to take a shower to calm down. This entails turning on the hot water heater and taking all my clothes out of the shower stall that doubles as a closet and laying them on the bed. After dropping a few things and looking for my shampoo by pulling out everything from under the sink, I was ready for my shower. We were almost out of water so a navy shower was necessary. That allows a quick soap, condition and rinse. My eyes were closed when I groped for the tap and accidentally turned on the hot water (which is very hot because Dale can’t reach the dial to turn it down). I proceeded to burn my scalp. I jumped out of the stall yelling to no one and hopped around a bit. I then went back in and turned the cold water on and had a freezing albeit safe rinse. I hate showers always have, always will.

By now I am almost in tears and only half way through the day. I decide to take a run up to the gas station and return my two movies to the red box. The road is very bumpy and dusty and is a long 5 miles. But I made it unscathed only to find out that I hadn’t put a the disc in one of the cases. So I go all the way back and get the disc and go back to the gas station and put it in the box. I try to pick out another movie but the sun is hitting the screen and I have to duck under a little flap to see. It isn’t very sucessful at the best of times and as a result I accidently pick out a movie I didn’t want but by now I take it home anyways and we watch it. And now I know why I didn’t want it.

But I finally turn my day around a bit by doing some funny portraits for some friends that they loved them and spent the rest of the day doing art. Which made a bad day good after all.

So presently Dale is packing up and we hope to leave tomorrow to go to what I hope is an isolated area called Red Canyon. We’ve never been there so who knows? 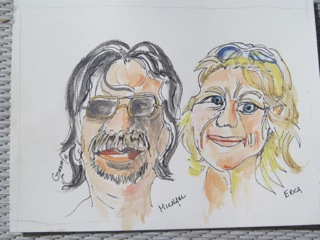 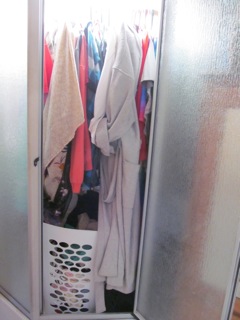 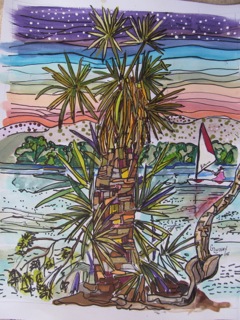