Well it finally feels like a real Arizona winter. Just in time too. Our 19 yr. old grandson Joel flew into Phoenix on Saturday night and we picked him up to take him camping with us. The next morning we headed up to Salome, a tiny place northwest of Quartzite where our friends Rick and Diane are staying with some other friends Joanne and Meryl at a campsite. We booked in for the week even though you all know how much I hate these parks. But it has a nice swimming pool and hot tub as well as a number of events during the week. We always have a great time with R and D so I girded my loins and agreed. This worked out fine because we had free internet and were to download a bunch of things on my new computer.

Of course like all young people Joel is a computer expert and nursed me along.  He even downloaded some movies for us.

We have been dong a lot of quading around the site. There is a lovely lookout about 3 miles up into the mountains The seven of us went up for snacks and hotdogs. Someone had built a great fire pit with a screen on top. We watched the spectacular sunset over the valley and drove home in the dark. Joel and I took turns riding in the back. 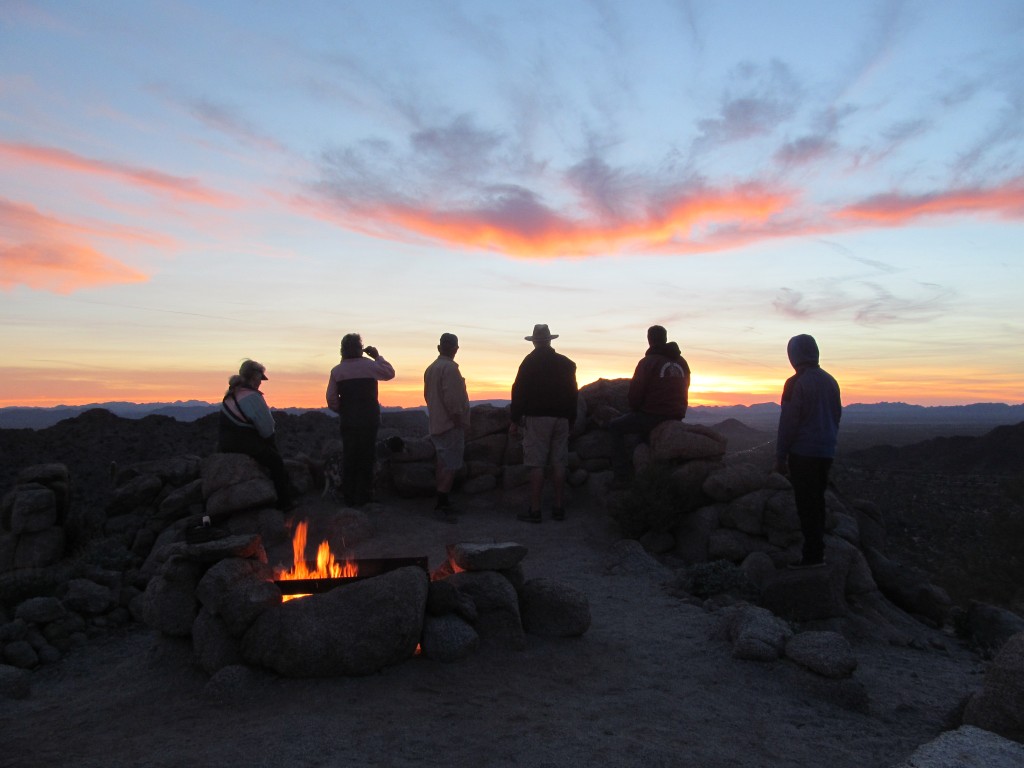 Yesterday Joel and I decided to look for a trail that we could see from the lookout yesterday. We were doing fine and thought we had found it But the longer we were on it the more we realized that we might have bitten off more4 than we figured. But the ride was fun, going up and down and around and through washes. We started to climb and up and up we went, By now we didn’t have a clue where we were. But lo and behold Joel had his GPS. Now we knew where we were  in-the middle of nowhere but not sure how to get back home. It was very hot and we had water so all was not lost, We finally figured out which direction to go and made our way through the mountains to come out about 6 miles from home but we were now on a road we knew .

When we got back we got read the riot act. Dale and Rick were worried because we had been gone for almost 4 hours. But all was well in the end and Joel got his real taste of the Arizona Deserts, by the way he drove all the way just like a pro.

The next day was the something annual chili cook off and salsa judging extravaganza. It started off with the poker run on ATV’s. A seventeen mile round trip with stations to stop and pick a card for a poker hand. I guess there only hope was Joel who got an ace, two, three, four and disappointingly another four -close but no cigar. When they drove in Joel went directly to the finish booth to register his poker hand and the whole booth broke out laughing, he was covered from head to toe with white dust making him look like an old man. Joel is a kind of novelty around here and gets lots of attention and questions. He has been a big hit in the hot tub at nights and all around the trailer park. He’s quite the socializer. He loves our UTV Babe and also has been driving us around in the truck. He also has been paying a marble game with some of our friends and evidently was the desired partner.

We have left Salome and are camping outside Wickenberg. It is quite hot during the day but Joel has extra blankets for the cold nights.

My knee has healed up very well and I am ready to go through it again.