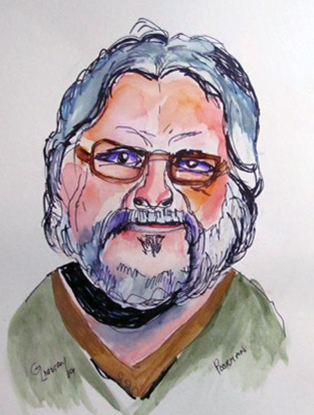 Before Hector could move in with his sister he would have to go to a Halfway house in Phoenix. These homes were designed to ease the transition into the public after prison. It was also to help the homeless and prisoners who didn’t have a home to go to like Hector.  They provided these services free to anyone who wasn’t already getting government benefits.  He did receive some social security so he would pay $400 or $500 a month to stay in the home. He also had to take courses throughout his stay, expected while he was an inmate on parole.  When he finished his required courses he was free to move in with his sister for the rest of his parole time.

Margo was now a working Pastor when Hector moved in with her and her husband David. His hope was to help look after his mother who he hadn’t seen for 10 years while his sister was working with her church members.

One of the other things he did was manage his mother’s finances.  He wanted to ensure that all her income was allotted for her care and needs and not being donated to the family’s church.  Not surprisingly, this caused some friction between Hector and Margo. Hector, Margo and David needed a have a heart to heart talk.  David wanted Hector to get off his property but Hector refused because he didn’t want to leave his mother who was now 91 years old and needed care. They wouldn’t budge so Hector went into his mom’s bedroom to say goodbye and tell her why he had to leave. His mother got really mad at Margo and called her in and tried to slap Margo with her frail 91-year-old hand.

But Margo had a plan and quickly called Hector’s parole officer and told him that Hector had tried to kill her husband. Moments later a policeman and his parole officer came to the house and took Hector back to a halfway house to finish his parole  At the same time Margo and David got a restraining order against Hector instructing him that he could not come within 100 ft. of Margo’s home or anyone who lives there. That meant that Hector might never get to see his mother again.

Hector went back to Yuma and served the rest of his parole.  After that, Hector went back to his life as a homeless person. He became depressed and stayed that way for the next few years praying to God to help him see his mother again.

At this time Hector revealed that he had a daughter.  Her name is Jessica ad she was born in 1982, now 37 years old.  He told me that at the time of their divorce, Hector’s wife failed to tell him she was 6 months pregnant with his baby. Barbara later filed for a child support order for Jessica but kept him from ever seeing her.  As a result, he paid child support for many years.  Barbara didn’t tell Jessica that she was receiving this support.  While he was in prison,  she reached 18 and he finished paying support but he has still never seen his daughter.  In 2015, he received a letter from Margo telling him that his ex-wife has passed away from cancer.  She had found  Jessica and she wanted to write to him in prison.  He received a letter from her asking if she can visit him when he gets out. On May 3rd, 2016 he met his daughter for the first time.  Jessica had been told that her father was dead so this was an emotional meeting for both of them.  After the meeting, Hector asked his parole officer if he could move in with his daughter because she wanted to spend more time with him.

By this time he felt abandoned by his family.  He is still banned from seeing his mother and he can’t even phone her.  To compensate, he moves in with Jessica.  But in less than a month they both realize that they are really strangers and he hasn’t found a way to get his head straightened out yet.  He moves out and goes back to Yuma.

He spent his first 20 days at the Cross Roads Mission.  When he got his act together he went out and bought himself a 2004 van.  The money was saved from the income he got for his Social Security benefits.  This was to be his new home. He outfitted it with a cooler and bed along with plenty of food.  He chooses to live around Fortuna Pond as well as on the many canals around that area.  He caught fish, frogs and snakes to eat with a can of corn or beans. He was technically homeless but quite loves his lifestyle.  He still had to stretch his benefits check to pay for doctors, a psychiatrist, hospital bills, car payments, insurance and gas and ice   He had a number of good friends who are also homeless living on the Colorado River. He tried to visit them at least once a month.  They all sit around and tell stories.  Hector told me that homeless people don’t like to talk to what he calls “rich” people, just each other.  (Obviously, I am an honored exception the rule).

Hector often spoke to me of his dream of someday having a little white house with a white picket fence.  But in the meantime, this lifestyle is better for him.  He said he likes to live alone so he won’t hurt anyone again.

When did I ask Hector how he felt about his life now that he is 64 years old?  This is what he told me:

He said these rules should be taught to all homeless people because they are humans too.

After we’d left the Yuma area I stayed in touch with Hector, mostly by phone and mail. But we came back to that area several times over the winter. I’d find out where he was staying.  He was on the canals near the foothills so we dropped by to visit him.  We had Dale’s sister staying with us for Christmas so we took her to meet him. He liked her a lot so he took pictures of all of us and promised to draw pictures of all of us and send them to us.  I had seen some of his work and knew that he was quite talented.  He made good his promise and later mailed the drawings to us.  I decided to return the favor and did one of him as well and sent it to him.  He called as soon as he got it and said he really liked it and showed it around to his homeless friends.  I was pleased.

When we talked he always seemed well but I could see he was lonely.  One call he confessed that he didn’t tell me everything that was going on because he just didn’t know how it was going to turn out.