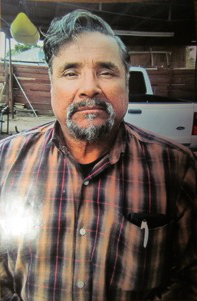 At that time there were only 2 people in Hector’s family that showed him any love at all, his mother and his sister, Rose. He respected them very much.  The rest of his family were awful towards him, calling him crazy and a killer and telling him to stay away from their families forever.  This treatment from his own family made him very sad, lonely and isolated.

But as luck would have it Poorman met a lady on January 2018 just as he arrived back in Yuma on the Greyhound bus.   Her name was Mary Jesus Herrera.  He was shopping in a Walgreen store.  She was shopping with her sister Lucy.  They chatted for a while and they invited him to attend their church the following Sunday. When Sunday came he drove his new van over to the church of Mary and Lucy.  After the service, he invited Mary to have a picnic with him at a local park. The only thing he had to serve her was beans and wieners, which she seemed to enjoy.  They had 4 more picnics just like it in four more Yuma parks.

By the fourth picnic, Mary told Poorman that she loved him. But he became very upset and told her no, no, no. She shouldn’t say those words to him. He said that if he said them back then it would mean he had money to look after her.  He said that he was a poor homeless man. His homeless friends don’t even know his real name, he is just Poorman to them.  Hector felt that every man should have to earn the right to love a woman by working and having money to look after all her needs, buying a home, a car, and whatever else she would need to keep her happy. He told her he couldn’t do any of those things. He felt that God brought her to him because he prayed for a good woman but there was no way he could say he loved her because it was not possible.

So he took Mary back to her sister’s home in Yuma where her two sisters Lucy and Silvia were living together  He felt terrible doing this but in his heart, he felt that relationship was hopeless. But in a couple of days, Mary phoned him and told him again that she loved him and was heartbroken.  So here was his great dilemma, should he see her or do the right thing by letting her go even though she was a fine woman and would make any man a wonderful wife.  But he told her no and that was that.

A few weeks later Mary phoned him again.  This time he agreed that he could see her but only as a friend.  Even though it had been over 30 years since he had made love with a woman, he didn’t want to end up hurting her, so he didn’t have the courage to see her except as a friend.

But Mary persisted for months by phoning him many times even though he refused to answer the phone.  But he finally weakened one day and answered the phone. Mary asked him to speak with one of her sons named Cesar. But when he agreed it seemed to Hector that this man was showing off by acting like a suspicious father.  It turned into an inquisition with questions about his age and his intentions.  He wanted to know how long they had known each other  Hector thought the conversation had turned insulting.  Hector got mad and told the son that neither Mary nor Cesar should call again because he didn’t want this kind of trouble.

After that Hector prayed for answers but continued to ignore Mary’s calls.  A month went by with nothing changing until Hector decided to talk to her and answered.  She asked him why he wasn’t answering her calls.  She thought that they were, at least friends.  He told her that he felt that Cesar had disrespected him.  They both realized that it wasn’t Mary’s fault so he agreed to see her.

But Hector had another plan.  He decided that he would show Mary exactly how he lived; a homeless, poor vagabond, a lonely wanderer.  He was 100%  sure when Mary saw the real truth she would reject him in a hurry.

So the next day he picked up Mary and took her out to the canals and showed her all his camping spots. It is a 60-mile trip to show her all of them.  He pointed out the wooden stands he constructed at each river bank where he showers. He uses these twice a week in the summer, pouring warm water over himself.  In the winter he uses cold water.  In between, he has what he calls a “bird bath” before bed. After the tour, they stay in the van together, just as friends.  The next morning he cooked Mary a breakfast of the 6-pound Catfish he caught the other day.  He makes it with sweet corn and calls it a Blessing from God.

So Mary saw that Hector’s life suited him except for the loneliness.  But from time to time he got very depressed.  But he was very industrious, cleaning up his campsite and keeping his van tidy.

He showed her many more campsites he used and up in the Foothills where he showed her his desert friend.   His name is Willy and he is a Gopher Rat. Hector calls him by stamping his feet at the animal’s hole.   Out pops Willy. He told her that he was able to tame him in a week so he would eat out of Hector’s hand. He feeds him chips and greens he scrounges up.  He spent several days showing the real way he lives and expects  Mary to reject him at any time.   And eventually, Mary said to him, “Poorman, you have been homeless and lonely for many years.  I love you and I don’t care how poor you are or how you live”. He told her that he had prayed twice for a good woman and twice God sent him her.

At this time Mary was living with her son Cesar.  So Hector explained that he received $1000.00 a month and his living expenses and payments are $600.00.  But with that, they could get a small apartment in Yuma. He also gets $15.00 a month in food stamps so they would have to look for free food sometimes, but he believes that Jesus will look after them.   It appears that Mary gets no benefits at all so now she would become a “Poor woman” as well as “Poor wife”

On Saturday, March 2, 2019, Hector and Mary were having a good day on the Canals, when Cesor phoned Mary and told her to bring Poorman to meet him.

I got most of this last information by phone or letter. He told me that Mary told him to “clean up” and “to get a shave and a hair cut,” because he looked like’ big foot”  So Hector took her advice and he sent me a picture of the ‘new Him’.  I hardly recognized him.  He looked wonderful.

We are back in Washington State and it looks like we won’t be going south anymore, but I kept in touch with Hector by phone.  I was surprised when I didn’t hear from him for a while.  But on March 26, 2019, he bought a cheap trailer so that he and Mary could get married.  The very next day they went to Yuma City Hall and did just that.  They got married!!!.  I was so happy for them.  I asked if they took a picture and he said that he would send me one right away along with a copy of the marriage certificate.   A few days later I received the photos and certificate.  This is the letter that came with it.

“ My dear Gail Lindsay.  I got myself a nice, good-hearted woman that earns no benefits. I nick-named her “poor woman”.  Her name used to be Maria Jesus Herrera, her name now is Maria Jesus Jimenez.  She is 65 years old.  I married her in the State of Arizona, Yuma Court Yuma, March 27, 2019.  I paid $20 each for our wedding rings. In the first 15 days of our marriage, I have learned these things;  what love is, that being loved by someone else other than God carries a huge meaning in life, I am no longer a lonely man living with depression. I don’t have to have dinner by myself anymore, I don’t have to sleep alone anymore. After all my 36 years of being by myself, living a hard life, I am finally where God wants me to be.  23 of 38 years I was homeless. But on this day I know no matter how poor we are.  I have 2 cents in my pocket.  We live in a small trailer with a broken down shower and water heater with rent of  $340 month plus utilities. It’s still hard for me to believe I finally live in my own home.

I am the happiest Poorman that lives this day.

So ends the story of Hector on these pages.  I don’t know if we will stay in touch or not, only time will tell.  It was an honor to be able to write Hector’s story, I hope I have done it justice.  You can each take away what you want from Hector’s story.  Myself, I was once again reminded that everyone has a story and is always more complex than you might imagine.  We are all part of the big picture, we all make mistakes, we all love and cry and learn.  We are all the same.

Medical Update – We must be getting old

The Story of Hector – Part 2