We find ourselves spending Christmas in Hope. Which seems kinda appropriate. We are actually staying in a park – The Rambin’ Roads RV Resort. We are here because we love visiting our friends R and D from Alberta and they almost always stay in parks. I was prepared to boon dock somewhere near them but when we arrived we found this particular park to be quite spacious, very comfortable (laundry, showers, free movies, clubhouse, painting groups and best of all a fully equipped Lapidary building with classes) And the price was very reasonable So we decided to stay here for a month.

It’s been a blast. I’ve been to the painting group if about 10 people just working on their own work. Most of them are quite talented but all do representational type art, so I feel a bit like an onion in a petunia patch. But they are all very nice and fun to be with.

We have had several fun dinners together and met lots of new people. One day I asked Dale if we could just go out together for a ride. At first we were going to take Babe but there were no nearby rock places. So we decided to go on a trip looking for Marble out of Wendon. The book said that it was about 7 ½ miles on a dirt road (shows picture of nice dirt road) and then you go left for another 1 ½ miles on a rougher road which then turns into a VERY rough road. But you could walk up to the site..

So we find the road and it’s not too bad for a few blocks then we started to hit washouts. This gradually got worse and worse. The road was gradually climbing up to a plateau and Dale was sure it would improve when we got on top. By the time we went through two very tough gullies and reached the top we were about half way. We kept going still hoping the road would improve, which it didn’t, and I asked to get out and walk with the dogs for a break. Dale took some of the air out of the tires and we proceeded on to the site. It was a very long 71/2 miles

We did find some nice pieces of colored marble but in the future I wouldn’t drive that road in anything but Babe.

So much for our nice drive.

But there are still ore places to find and more pictures to paint – guess which one I’m doing.

But it’s Christmas Day and we have R and D over for our famous Frisco Fogs (gin, ice cream and 7up) before breakfast and gift opening. I found a balloon colored long caftan at the thrift store so I am wearing it this morning. My friends are nervous about me going out side in the strong wing in case I take off like a real balloon.

Last night we had a $5 gift exchange that was quite a bit of fun, though several times I thought violence might ensue. The prize gifts were a scratch lottery ticket that someone wanted to trade after he scratched it and got nothing, a large tin of popcorn, a nice set of tea towels, and an Allen wrench set I had possession of the tea towel right until the last minute and some guy took it for his wife and left me with an aroma heater that my neighbor brought.

We have another party on New Years and a Big Christmas Dinner today.. Never a dull moment in these parks.
But give me the desert anytime…. 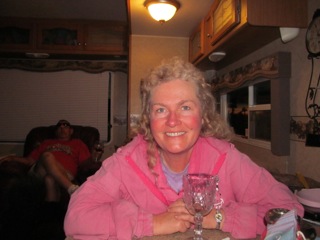 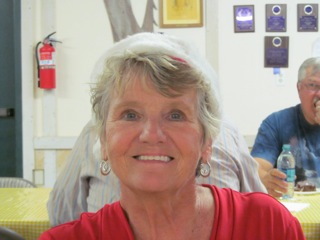 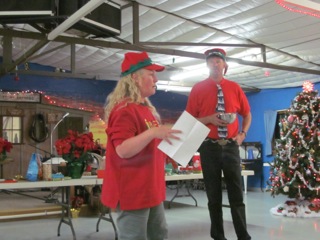 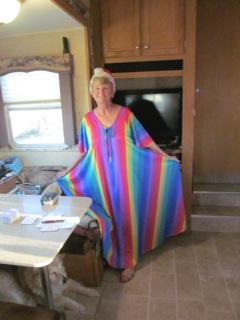 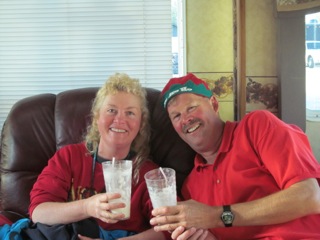 A Quiet Place to Sit