I spent last summer boring you with my surgery woes.  And I’m going to do it again this fall.  I had hoped that I could  avoid more surgery this summer so I could swim.  Well, I did pretty well.  I must have been in the lake a dozen or more times and I loved it.  It was a particularly warm summer so the water had heated up nicely.  I even managed to swim while Dale was fishing a number of times. (quite a number)

But that is soon to end.  My left knee has started to really act up and I knew that I would have to do something soon. I was concerned because my knee doctor is very busy and I thought I waited too long.  But much to my delight he could do a knee replacement before the middle of October.  This would allow us to still go to Arizona around Christmas.

I went through the hoops to get an appointment with his PA Vince and got the necessary X-rays.  While I was there I was approached by my Dr.’s nurse and asked if I would be interested in taking part in a research study dealing with pain after surgery.  I listened to the pitch and agreed I would like to try it.  It is a double blind study on the effects of two different ablations on nerves near the surgery site.  One is a freezing compound the other is radiant (hot) and the third is a placebo.  Neither I nor the doctor knows which one I will get.    The plan is to study the pain management and try to reduce the opioid use.

I had to go out to Post Falls (about 100 miles from here) to get the treatment at least 3 weeks before my surgery.  It was very much like any other out-patient surgery.  I was prepped and then visited by the anesthetist and the doctor.  I was put to sleep and woke up about 25 minutes later with three bandaids on my knee. I was cautioned about side effects and sent home.

I didn’t have any side affects and life went on as usual. I visited my regular Dr. for a physical checkup. When I went back in for the results he said that there was some problem with my oxidants and I had to go on a 3 month course of antioxidants.  This was a whopping big bunch of new pills.  He also mentioned that it had been some time since my last mammogram and he would call them to book me for one.  Just what I needed, more appointments and more trips to Spokane.  I went when called and hoped that would be the end of it.  But not so much.  They found some “suspicious” shadows and wanted me back for an ultra-sound.  Back to Spokane for more tests. At the point I wasn’t worried because I had this before a long time ago and it was nothing.  But way back in my mind I was uneasy.  When I went for my ultrasound the Radiologist wasn’t completely re-assured with the result. He noted some concern and ordered a biopsy.  It said it was probably nothing but he wanted to err on the side of safety.  Now, I was getting worried.  I couldn’t stop thinking about the worst possible scenarios.

Next, another trip and a biopsy.  I would hear in 2 to 3 days.  2 days passed, then 3 and 4.  It was a Friday on the 5th day so I phoned my doctor to find out what happened to my result.  His nurse finally called me back with the good news that it wasn’t anything serious.  Big Whew!!

The next trip was for Dale, his appointment with his Cardiologist.  The Doc didn’t like his electrocardiogram and hooked up to a heart monitor.  He would have to wear it for 48 hours and then mail it back to the doctor.  A few days later he phones and says he doesn’t like the number of down strokes that the monitor recorded.  Dale had to make another appointment to get an ablation done if they can fix that.  It is on Oct 4th, about 2 weeks after my surgery.

In the meantime I need a mandatory dentist clearance before they will operate.  I go to the the dentist at the Clinic on the Reservation for this which is about 10 miles and a short ferry ride away. That done, I have to have a long telephone discussion with a nurse for another clearance.

Next is a CT Scan on Thursday again inSpokane.

The  final step is my appointment with my surgeon (I think).  I go to my appointment at 2;00 and find out I completely missed my 11:00 appointment for my Pre Op exam. Is it any wonder?  But I feel awful.  My Doc is mad cause it is absolutely necessary for them to operate.  They have rescheduled it for the next week, two days before the surgery.  Now all I have to remember is to cease any pills that are blood thinners. shower twice with a antiseptic wash, don’t eat or drink after midnight and let them know that I can’t make the first surgery because we have to travel in from Hunters.   On top of that, I have been given a diary where I must record any and all pain medicine I take for my knee (the time, the date, the type , the amount and my pain level at that time on a scale of 1 to 10.) No problem!!

I made it to my pre-op appointment and got that all done. At the same time I realized that the BIG EVENT was only two days away.

We had made arrangements to stay at a friend’s place closer to the hospital so we had a down day and then on Thursday I checked in at 8 am.  There was some delay so the surgery didn’t start until 12:30.  The anesthetist came in during my pre-admission and sat down on my bed. “Oh Oh, this wasn’t good!!”

He explained that because I had back surgery my back would be hard to penetrate for a spinal block.  We tossed around ideas but came to the conclusion that some pain for a short time would be better in the long run so I agreed to go ahead with a block.  This entailed sitting on the operating table with my legs dangling and  An assistant holding me upright by the shoulders while the Dr. probed around my spine until he hit a space to go in.  It was uncomfortable but not unbearable.  Soon after was out like a light and came to in the recovery room all done and WIDE awake.  I was ready to go dancing!!!

Back at my room I continued to feel good as the block wore off.  Then things got a bit more challenging.  But they didn’t get me up till the next day and they sent me home by 5:00 pm

I spent the next few days on the rollercoaster, going from rarin’-to-go to tears by 6:00 pm.  Many power naps and my daughter and son in law for distraction helped pass the time.  I  have been to one session of Physical Therapy which was hard and a bit of walking.

So I guess I can start looking forward to the next phase of my life and prepare to go south for the winter.  The weather is holding, our place is gently moving into fall and all is right with the  world. 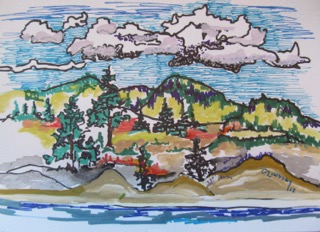 The Gift of Staying Home

The Story of Hector – Part 3