Things have been pretty scary around here this summer.  We’ve had some of the hottest weather on record which caused some of the most violent thunderstorms which in turn started wildfires all around Washington. Lake Roosevelt has had it’s share of all three.

The winds were so bad during one storm that 200 year old trees were snapped off like toothpicks and many were uprooted with root balls 20 ft high.  We were fortunate at our place to sustain almost no damage but evidence of the storm is all around us.  A fire started just about 10 miles south of us that was very hard to get under  control.  the terrain was difficult and there was a shortage of planes due to another fire that lies just 15 north of us.  Yesterday they looked like it was finally subdued so we took the boat down the ale to see the damage.  The fire was close to the water but there was only small pockets of smoke rising up the bank.  We parked the boat on a beach on the other side and watched for a while.  Suddenly a brisk breeze came up and within a half an hour the fire was reactivated.  See the photo below. Within minutes a helicopter with a bucket arrived and started  dropping water on the hotspots.  We couldn’t see what was going on on top and down the other side but we had to get home for supper so we left.

We went home and sometime after supper I noticed that Dale was missing. Since his second hand surgery was just a day ago I figured he got bored and went visiting. So I hopped on Babe and motored down to Kathie and Steves and sure enough there he was sitting on the viewpoint with Steve.  I walked up to see what they were doing and there, before me was a mountain on fire with smoke  billowing everywhere.  Kathie came up and we spent the next couple of hours watching the fire as the red sun went down.  It is still miles away from us but we did talk about what we would take if we got evacuated.  It is a dismal situation because we could see some houses on the mountain disappear while a flurry of activity started around others.  We went to bed  and slept to be awakened to the planes starting up.  It is now 10;30 and the lake is covered in smoke so we can’t see anything.

Our big Fair was to be this weekend but there are over 200 firefighters camped at the high school where most of the activities are so they will decide by Wednesday whether it will have to be re-scheduled. 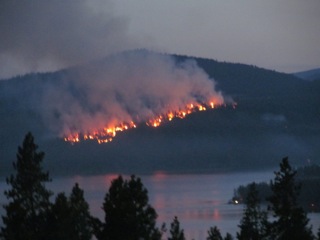