Things have been busy as usual but we did reach all our goals for this summer  The bedroom in the studio is sleepable even without a ceiling. Both my bathroom with claw foot tub and Dale’s bathroom and shower (with two shower heads) are useable.  Those things alone make a huge difference.  We have had a couple of guests already.  The first couple reported a funny peeping noise during the night. Upon investigation it was discovered that a very large toad was under the bed.  It was summarily evicted to sleep outside.  But when we were making up the bed the next morning there he was back under the bed.  Another visitor who came up when we were away reported a large “rattler”  in our garage entrance who I suspect was really a bull snake who went in to eliminate our toad.  In any case we haven’t heard a “peep” from either one since.

The same couple came to stay again and this time reported that the high ceiling was busy all night with bats.  At least no one is bored.

The fire season seemed to die down and the skies have been clear for a couple of weeks but the wind came up this afternoon and the valley is full of smoke again.  Haven’t heard yet what’s up but I am sure we will.

Tomorrow is the first annual All Girl Boat Party”,  an idea that I suggested and has caught on.  I am expecting about eight women to attend for a day of making merry and such.  I hope the weather cooperates, or it will turn into an all girls garage party.

Well the boat party went well though we only had five women instead of eight.  We went across the lake to climb up to a hidden waterfall.  I dispatched two women with dog screws to tie up the boat and we wandered up the creek.  Only myself and one other lady reached the top but the rest didn’t have good climbing shoes.  When we reached the boat it had come loose and drifted up stream to lodge next to a fallen log. It was in no danger and we easily boarded her but the two first mates were fired.  I suggested that one of them take the boat hook and push us out to deeper water because the motor was sitting in the mud.  Well there was much trading the boat hook but not much progress.  So in the end I got into the water which was about chest deep and pulled the boat out to a place where I could start the motor.  I felt a little like Humphrey Bogart in African Queen fortunately without the leeches.

Afloat again, we went down to a lovely sandy beach and pulled up on the shore.  Three of us went swimming while the other two got out our lunch.  The water was a bit cold but refreshing.  Back at the boat the girls put out quite a spread.  One of our ladies makes her own goat cheese which she had brought.  We had ham wrapped asparagus, homemade pesto, bacon wrapped water chestnuts, an assortment of garden vegetables with a dipping sauce, and crackers and chips galore.  Along with Mimosas to drink.   We ate until we were stuffed.  It was suggested that we should go looking for driftwood.  We found a cove where the high water had left a pile of wood. We climbed  around  around looking for pieces to take home.  I wanted to paint some masks and hang them on my trees.

Also I wanted some larger pieces to put in my gardens.  I hauled a couple of larger pieces which we put on the boat then headed back home.  It was a satisfying day and the weather cooperated beautifully.

Our yard has been quite busy especially the birds.  I knew they enjoyed the pond but when Dale took the little stone statue of a girl holding up her skirt and made it into a fountain the birds competed for the place where the little stream of water came in.

Some of the migratory birds have arrived along with our regulars plus a few new ones.  We have American goldfinch, and some new sparrows.  Added are 6 new red breasted nuthatches, one flicker, several chipmunks and one blue grouse.

The apartment is progressing and we have made arrangements with a fellow to come to tape the drywall for painting.  On our deck the flashing was completed and the solar curtains moved down to reach the railing.  It is a huge improvement  keeping the sun out much longer in the day without disturbing our wonderful view of the lake.

It is already time to start preparing to go south.  I can hardly believe how fast the summer has flown.  But I look forward to seeing all our traveling friends once more. 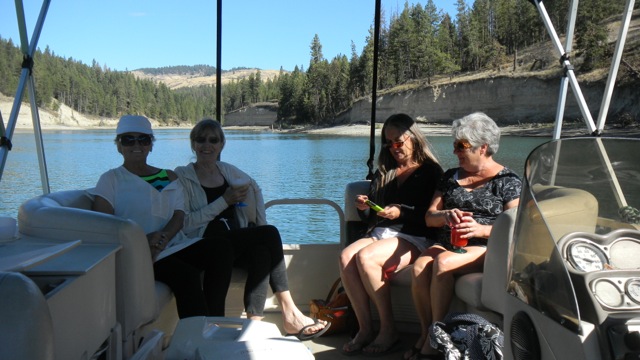 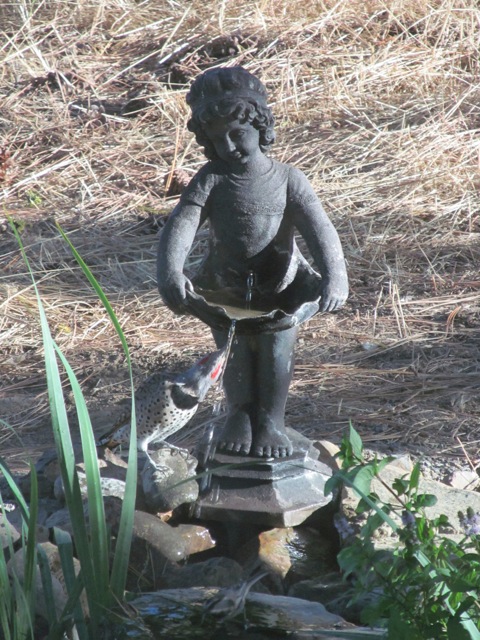 Why the Heck are We Here?