Leaving Globe, we headed down to warmer climes and as we were driving along the freeway I was in the trailer as usual.  I was just heading upstairs when I heard a very loud bang.  This was just as a semi was passing us.  I looked up into the bedroom and the blind on the safety window was shaking badly.  I pushed up to find that the whole window was gone.  The truck dropped back and I thought he had seen it pop out.  I immediately phoned Dale and as luck would have it, we were approaching a rest stop where we both pulled in.  The truck stopped next to us and the driver got out and so did Dale and I.  He was looking at his tires and said he heard a bang and thought he had a blowout.  I said that as he was passing our window flew out.  We looked between his cab and trailer and there was our window frame and a million little pieces of glass.  We realized that the window wasn’t latched properly and the vacuum had sucked it out of the trailer.  Well fortunately, no one was hurt so we patched the window and moved on.  Unfortunately we heard that a new window would cost up to $800.  This traveling sure is fun.

After that we moved down to another place in the desert just 9 miles north of Florence.  This property is actually a practice firing range for the military.  I guess they don’t use it all that much cause there was just one sign suggesting we avoid being bombed.  We did our best and came out alive and well.

Yesterday we invited our friends from Arizona City to join us for a nice ride around the area. The scenery was quite interesting and beautiful.  The day before, we checked out a couple of routes so we would know where we were gong.  A good ride was up through Cottonwood Canyon that wasn’t too rugged and still interesting.  We all started out for an hours drive.  The roads were good and hardly anyone else was out so we were quite enjoying ourselves. Dale took us up to a place where someone had blasted out a rock face looking for copper.  The slag was very fruitful with pieces of malachite and crystacholla as well as some nice conglomerate.  All was well until we went to go and our ‘Babe’ had a flat back tire.  Now this particular tire had been trouble before and had a number of plugs in it.  But not to worry, Dale whipped out his compressor and filled the tire.  Off we went down a rocky steep hill to bottom out in a valley with several choices of roads.  But the tire went flat again.  Dale did some poking and pushing at the plugs and announced he just had to re-inflate it and we would be good.  We started back up the hill we came down with me hanging from the machine trying to keep an eye on the tire and not fall out.  We got about half up the hill and had to stop again to get out the compressor.  We then limped up to flat ground and Dale was starting to suggest that this might be a bit more serious than he had originally anticipated.

So we limped along towards home with multi stops to re-inflate with it going flat faster and faster.  Finally Dale says he thinks I should get in our friends Rhino and we should go and I should bring back the truck and trailer for Babe.  He would continue to nurse it along.

I get in the dump bed with their dog Rowdy who loves me death all the way home.  We hook up the trailer to the truck and up I go to rescue my husband.  About 7 miles in he was waiting in a turn around.  He had evidently used every available substance to try to plug the ever-growing hole and gave up.  We quickly loaded up and headed for home.

Our very patient friends were waiting for us.  We all had drinks and supper and agreed that that was enough “fun” for one day.

I wonder what is next. 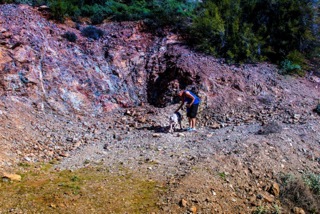 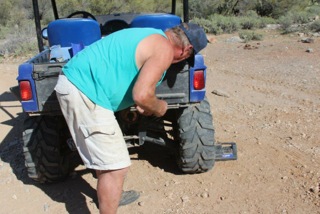