The day we left the Colorado River site, our neighbour Kent walked over to say goodbye.  He asked us if we heard any strange noises the night before.  We said we hadn’t and asked if he had.  Kent is a ham radio fan and his site was festooned with antennae and wires.  He talks to his friends in the evening and works on his You Tube accounts.  He said that last night while he was sitting by his computer he looked up at his coaxial wire and noticed that it moved a bit.  He kept watching and it was slipping outside very slowly.  At first he thought that maybe Dale had come over and was messing with him.  So he went to look outside to see if anyone was around.  Now the cable was being pulled out faster. When opened the door the cable jerked a couple of times and was still.  He couldn’t see anything outside and didn’t really want to wander around in the dark so he went back in and had no more trouble.

Dale and I laughed and told him that we had just come back from a walk and saw large cow prints and manure going down the road and into his site.  We followed them and sure enough they led right to Kent’s cable that was blocking the cow from getting to the river.  She must of startled when Kent opened the door and shook it off her head or wherever she was pulling it.  So that solved the mystery and Kent was grateful that she hadn’t pulled his radio set-up right through the window.

Next, after a lovely week with our friends in Arizona city, we decided to explore some BLM land about half way between Gila Bend and Casa Grande located between the Indian Reservation and the Barry Goldwater Testing Range.  We scoped-out the place first and then brought our trailer up and stayed for two weeks.  The second night there we had a fire and I set my stand-alone hammock up by the fire.  Dale went off to bed and I stayed up to watch the stars, which look like they are incredibly close. They are outstanding out here on the desert.

I was just going to go in to bed when I noticed a light on the horizon that I hadn’t seen before.  It was over by hills and as I watched it, it seemed to slowly sink below the horizon.  It was silent.  I sat up to get another look and all of a sudden there were two lights, both very bright and completely still.  Then they also started to sink slowly.  I thought I detected a vapor trail left in the place where they were.  I knew this was not a plane or anything I had seen before.  I went to the trailer and got my binoculars.  When I came out there was another bright light in the same place.  I looked through the glasses and watched it sink like the others.  I saw the vapor trail like the others.  Then there was nothing, so I packed up and went in to bed.  It was all quite puzzling.

The next morning I explained the whole thing to Dale.  He listened carefully and then told me he could explain it to me.  He asked me if I had read the signs on the road on our way up.  I said I hadn’t paid that much attention.  He told me what I had seen was the military in the Barry Goldwater Testing Range shooting off practice flares.   These are used to light up war zones and are very powerful.  They warned us about finding them in the Monument and to be sure not to touch them.  So I sighed and said I guess it wasn’t an alien invasion from outer space after all!!!

This big fella has 9 arms 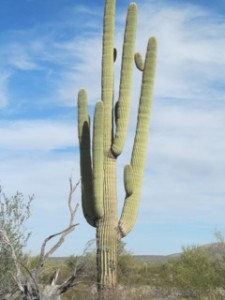 CHRISTMAS IN A TRAILER PARK