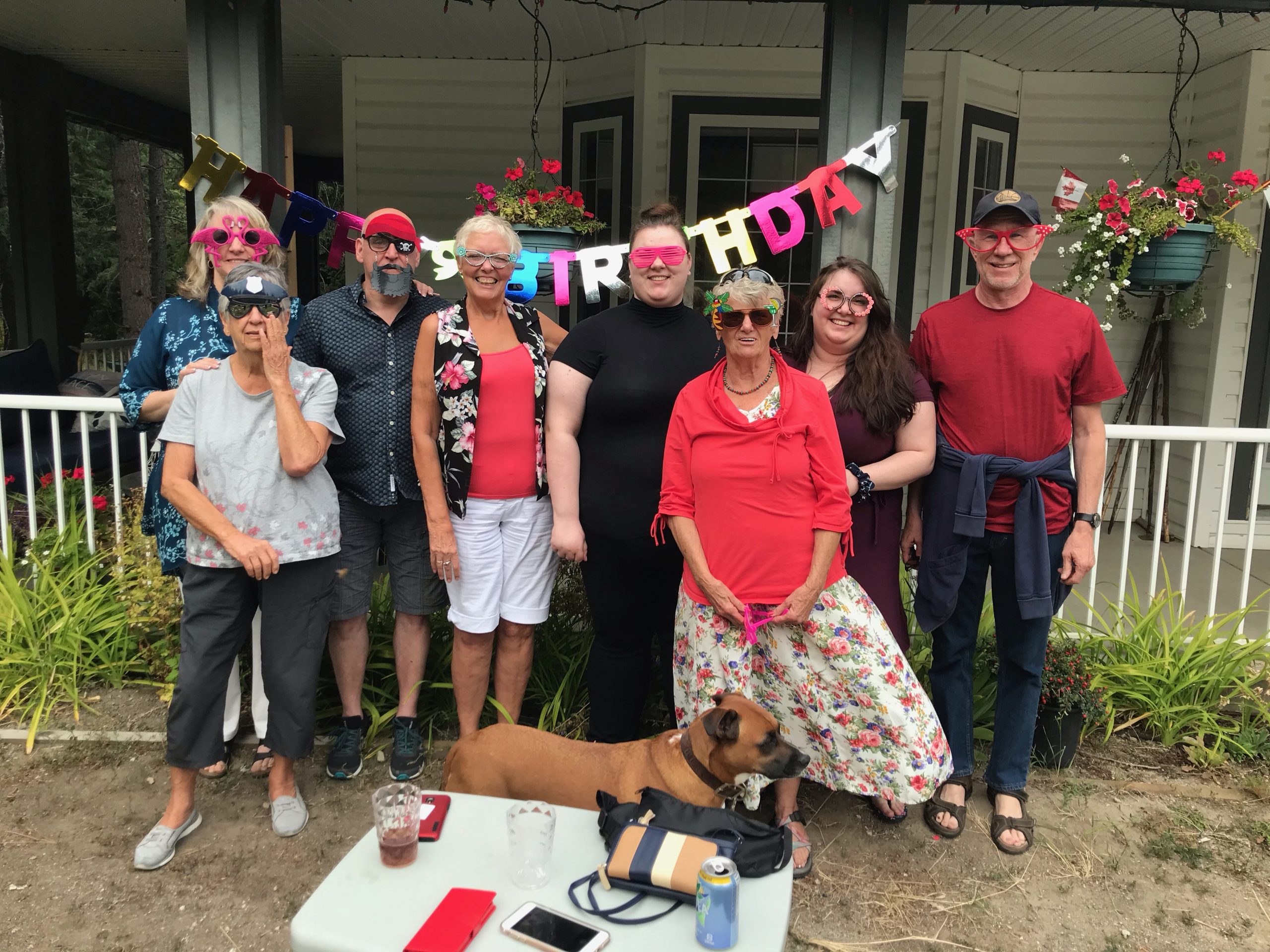 Hello again. I know I left you hanging in the last blog but’s hard to re-live some of that troublesome time.   While I waited for some message from Dale, I kind of cheated by calling our good friend and asking her to let me know how he was doing.  I was mainly concerned about his help and knew he would be too proud to ask for help.  But he was doing quite well, fishing every day and eating at the bar so I don’t know much he was trying to make up his mind about the future.  To decide if this arrangement would be permanent or not.

My worries about all this were soon interrupted when the mountain very close to us caught on fire.  There were other really bad fires near us but none as close as this.  I was driving home from West Kelowna shopping district one afternoon near three-thirty when I looked up and saw smoke billowing over the mountain close to our place.

When I got home I told my daughter about my sighting.  We both decided that we should start packing our cars just in case.  We were about half done when an RCMP car drove into our yard and the police told us that the fire was moving very fast and we should go as soon as we could.  Our whole street was evacuated within an hour.

My daughter and her husband accepted an offer from friends to stay with them, my granddaughter who lives upstairs went to stay with her sister in Rutland and I went to my other grandson and granddaughter’s place while we waited for news.

We couldn’t really find out too much but we could see the fire line on our computers and it was creeping closer and closer to our road.

We lived in suspense for a couple more days and heard that at least one structure was lost about one kilometer from us.  But we didn’t know what kind of structure it was.  Apart from a few roads with land and houses in this area, we were pretty isolated.

Finally, the weather changed a bit and though it didn’t rain, it clouded over and the wind went down.  Within a day of this, we were given the order that we could return.  It was after supper so some of us wanted to wait till morning but not me.  Bandit and I headed up the hill to see how things fared.  It looked pretty good except for the persistent smoke when I drove in.  I immediately took Bandit and hiked up to the top of our 20 acres.  There didn’t appear that anything had burned on the way up but right at the top the fire crews had cut the trees down and built a fire break.  It was black on one side of the road and still mostly green on our property.

But when all the smoke cleared literally the fire was stopped two houses from us.  Lucky, lucky, lucky us.

During all this, my 80th birthday approached and we had planned a party that had to be postponed till September.  Much to my surprise Dale phoned and said he was coming down for my birthday party.  Just like that! Things were looking up.  He arrived a few days before the party and we spent some time circling each other, neither of us knew what to say that wouldn’t be a hot subject.  But after some time and we relaxed and started to discuss our predicament and with my son-in-law’s counseling experience we started to heal.  Dale stayed and we started to rebuild our life and our relationship.

So we concentrated on getting our new digs renovated and the time passed pleasantly.  We visited wineries, took the boat out once and I continued to volunteer at the Thrift Shop.

There were still piles of paperwork trying to get Dale’s immigration registered.  Getting our vehicles registered was an expensive and tedious project, and we are still struggling with it. Also, my medical bills needed to be sent to our American Insurance. Thank heavens for my daughter who helped me get through the maze of rules.   Another crazy thing we found out was any mail that has to cross the border goes to a remote in the Caribbean for inspection and then is sent to the receiving country.  In our case, it was sent to Toronto and then to Mississagua for further sorting.  At last, it was sent to Kelowna and finally to our mailbox in West Kelowna.   You can imagine how long that takes!