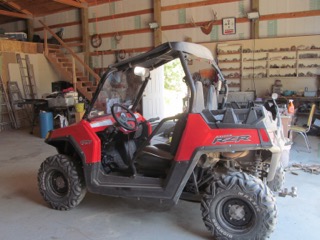 A couple of years ago we bought a cute side by side (UTV).  It is fire engine red and only 49 inches wide (regulation for hiking paths).  It seats two and has a small back box just big enough for Gracie and a roof to keep out the sun.  We love this thing.  And it will go ANYWHERE, at least it will go anywhere we are brave enough to go.  I use it around the yard to haul stuff and to go to the neighbors etc.  When we are down in Arizona we use it to go areas we would not have the stamina to go to.  It is a gem.

This little machine can climb hills and drag a cart filled with rocks for me. And if I so choose it can go like spit!! The speedometer reads up to 80 miles an hour.  Not that we would ever go that fast,  30 mph is about my limit.  I am not the dare devil type.  Dale, the other hand, is a bit of a speed demon and likes to put it through it’s paces.

Take the other night, we were visiting our neighbors who had their family with them.  They were very interested in our buggy.  Dale let them take it out for a spin and they came back raving about how fun it was.  Then Dale got bragging about how it could climb hills and stuff.  He offered a demonstration to our neighbors’s daughter-in-law.  She was game so off they went down to our lower road and Dale started up the hill across country. The grass had grown quite high so they were just crawling  slowly to avoid big rocks (thank heavens).

But due too a bad memory and the bad vision all of a sudden the UTV slid sideways into a forgotten perk hole.  The hole was about 6 ft deep.  Dale was on the bottom and his passenger was above him.  They were fortunately more shocked than hurt.

Dale asked her if she was ok and could stand up.  She said she was fine, so they both stood up  and surveyed their situation. She suggested that they call up for the rest of the family to come and help them get the UTV out.  She was very calm trying to get her husbands notice without alarming the kids.  He finally got the idea and started down the hill. By this time Dale had climbed under the front of the UTV and released the winch.  They wrapped it around a tree and slowly brought the machine up out of the hole and righted it.  It, of course , was just fine.  Dale and his passenger were a bit shaken up.

I had already gone to bed so I didn’t hear about the incident until the morning.  Dale sheepishly recounted last night’s activities.  I noticed he was limping and he said he might have pulled a muscle, or a tendon.  He was convinced it would heal in a day or so.

He carried on as before and we took off in the boat for a planned 6 day trip.  We lasted two nights and his leg bothered him more and more. So we headed back to home.

We were only about 3 hours out so we were home by 11 in the morning  We phoned the clinic and made an appointment for the next day.

We were home about 2 hours when the phone rang.  It was our friend next door asking for help.  They too had gone on a boat trip and were now driving home with their boat.  Their truck just quit so they were stranded on the highway and no way to get their boat home.  Now it was Dale to the rescue! I drove my car out and Dale took his truck.  They were only about 5 miles north of town.  After surveying the situation, Dale decided he would hook up the boat (about  30 ft craft) and he and our neighbor would take it to it to his place near us.  I took his wife with me and we went ahead.   They got the boat home and in the garage and headed back to tow the truck to a local mechanic.

With that all done it was late in the afternoon.  We now had to drive the couple back to Spokane were their real home is situated.  They insisted on taking us out for dinner and paying us for gas.  We had a nice time getting to know them better.

Other than all that excitement, I have been busy keeping up with the property.  Now that we have a big home going up next to us, we put up a privacy lattice around our oasis.  Also I put in a tiny veggie garden with just tomatoes, peas and beans for the table.

My broken husband is busy resting now but we will go to the lake later for a little recreation.  Hummmm! It just occurred to me that his broken rib and pulled muscle were both recreational accidents.  Maybe I’d better go swimming by myself. 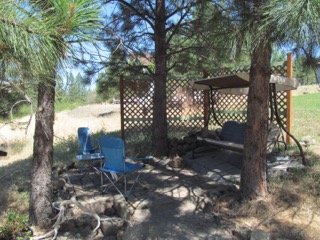 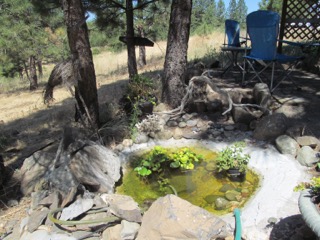 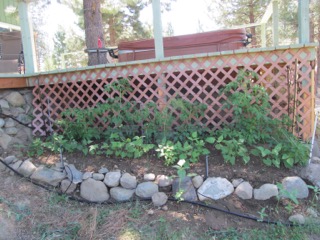 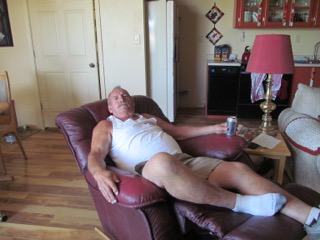 Dale , resting as the Doc ordered

THE OTHER SIDE OF THE HILL