This is really October 21st. the day after Dale’s “procedure”.  I awoke around 5 am and couldn’t go back to sleep.  I finally got up around six and got dressed. I stayed around the house with my friends until Dale phoned about 8 o’clock.  He still sounded hoarse but in pretty good spirits.  Last night we agreed that Dale would stay in the hospital and try the medication.  They could give him 5 doses over the next few days and watch him to see how it reacted with his other meds.  I went up to the hospital around 11 o’clock and parked at the Heart Institute but it was closed.  I assumed Dale was in the main hospital.  But to get there from where is was ended being an hour of walking around trying to find an entrance, through parking garages, the Children’s Hospital, up ‘Star’ elevators and down ‘Fish’ elevators.  But with some help from staff I finally found his room on the 6th floor.  It would have been easier to re-park my car in the arcade but I had Gracie with me and she needed somewhere to walk.

I was happy to see Dale up and around and already starting to get bored.  He had 2 of his 5  doses and was feeling good so far.  His medicine, Tikosyn, is a little rare and not always easy to find.  It is also kind of sticky about time and dose and it doesn’t react well with Mirepex therefore needs to be separated by 3 hours.  But if it works, it’s worth it.

We pulled chairs around the bed and used the sheets as a table for us to play Canasta. (We do this every morning, have for 15 years, and are only 2 games apart).  Of course, he beat me mercilessly.   I stayed for a couple of hours and then did some shopping for supper.

The next day we had all kinds of information from 2 pharmacists and the doctor and his partner.  It seems that the ablation might have improved Dale’s condition as much as 30% but still feels like a failure to the doc.  Also, it looks like this medicine might be working, at least it is not reacting to his drugs.  But if this fails there are still a number of options.  He could try another cardio-inversion (the first one failed but with things a bit better it might be worth trying), the same with another oblation.  There are also more drugs he can try and if everything fails he can aways have a pacemaker put in.  So things aren’t as bad as they seemed on Friday night.

Dale got released on Monday morning with no restrictions and we were home by 1 pm.  Today, Wednesday, he is still tired and bored but I hope he will be better in the next few days.

I’ll keep everyone informed of anything new.

The chickens have nothing to do with this but I haven’t shown you them before and Dan says I need a photo. 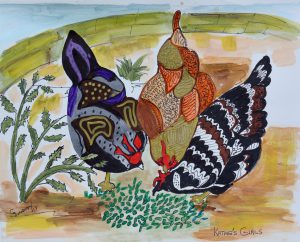