We’ve been at a Hope RV park for half of a month and for the most part I am adjusting.  Unfortunately, we have to travel at least 45 miles to get to a large city (anything with a Walmart is considered large in my mind).  Last week we had to go even further, all the way to Yuma then into Mexico.  I needed to go back to my dentist and get a letter to take to my knee surgeon to prove my mouth was in good shape.  Dale also had another wisdom tooth bothering him.  It is 140  miles to Yuma and another 10 miles to Las Algedones, so it was going to take all day.  Since the beginning of time I have been responsible for remembering our passports, my green card and if necessary the dogs’ papers.  So before we go I get Dales passport and my passport (just in case) and my green card and off we go.

It’s about 11 o’clock when we reach Mexico and we proceed right to our dentist’s office.   We were greeted with great gusto and I got my letter right away.  But it appeared that Dale’s wisdom tooth would have to be extracted. Since he was on blood thinners, he would have to come back in 3 days.  Meanwhile they prescribed an antibiotic.  We picked up the pills and decided to go right back to Yuma.

There was a small line at the border crossing but not too bad. In about 15 minutes we reached the building and went inside.  Only one agent was open.  Dale asked me for his passport and I reached in my purse and handed it to him.  He looked at it and said that it wasn’t his, it was mine.  So I reached back in and found the other one and handed it to him.  By now we were one away from the agent.  Dale tapped me on the shoulder and whispered that the passport wasn’t his, it was an old one of mine.  I looked at him in horror and groveled in my purse again.  No more passports!!!!  We stepped back against the wall and let the line proceed while I panicked!!

Well, you all know how I hate driving the truck especially all that way, and then back again.  And then both of us drive back again.  Meanwhile Dale is going to have to kill time in Mexico for 6 or more hours.  What a disaster.

About then another agent opened his line and signaled for us to come over.  We explained our dilemma and handed him all the passports and my  green card.   He just smiled and asked to see Dale’s drivers license.  He asked if the name was the same on his Passport.  Dale said it was so the agent tapped on his computer and declared that it came up and was fine.  He asked about Dale’s antibiotic and wished us a great day as he let us through.

What a relief!!!  That border guard made up for a whole bunch of cranky ones.  But my adrenalin was still surging through my veins and my hands were shaking.  I was horrified that I screwed up.  I was so sure I had brought the right things but I was so wrong.  My confidence was shaken.

But I dodged the bullet so we celebrated by visiting some friends and then went up to Walmart and got groceries and something for supper.  It was after 5 when we left for home with only one stop at Barons for gas.  That done we headed out the highway.  I looked in my purse for my glasses.  They were not there.  I emptied out my purse just to be sure.  No glasses or glass case.  I knelt on the seat and rummaged through the bags in the back but come up empty.  Panic was back!!!  These were my new glasses, the only glasses I could see through.  Where were they?

The last time I remember using them was in the deli at Walmart.  By now Dale knew I was in a panic again, so he turned around and headed back to Walmart.  I rushed in and went to Customer Service and asked.  The woman looked into the recent lost and found drawer but there were no glasses.  She was sympathetic and suggested that I look around where I was shopping and retrace my steps.  So I am racing  (more like limping) around the store checking all areas.  Nothing!  So I go back to Customer Service and leave my card with a description of my glasses.  I limp back to the truck and tell Dale we might as well go home.

We get home and take in the groceries.  Dale has to go back to Mexico to have his last wisdom tooth extracted on Friday so I agree to go with him and pay for another pair of glasses.  We eat our supper and watch a movie.  Dale goes to bed early but I am still wired from the day.  I clean up the kitchen and sit down to catch up on my banking peering through my old scratched glasses.  I remember I left a receipt in the truck, so I go out to get it.  With the truck light on I rummage through the remaining plastic bags to find it and there on the back shelf is my glass case and glasses.  Whew!!  All that panic for nothing. I went back to the trailer and went to bed relieved until the next time I lose something and it starts all over again. 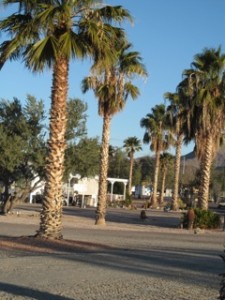 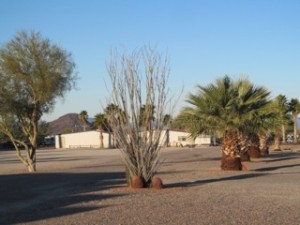