Alright, I admit it. I am crazy at my age to get a puppy. They are a lot of work, aggravation and trouble. But in my defence, I am a true blue, dyed in the wool dog lover.  I’ve had dogs all my life.  As a child, we had Labs, Cocker Spaniels and Gordon Setters.  My dad believed in the responsibility of a dog owner to train them to be well behaved and they all were.  I have not been quite as diligent.

There was a period of my life when I was raising children that dogs were more than I could handle.  But soon after my current husband ( I’ve had several, dogs and husbands) wanted a dog because he had lived in the city all his life he never had a chance to own one. Because his sister had Dashhounds it seemed like a reasonable choice.  We got a mixed female who had puppies and we kept her and one puppy. Unfortunately a year later some misguided person poisoned all the dogs on our block and she was one of the fatalities.  But her puppy (oddly named Brown) lived a long and adventurous life and died at 19 years old.

When he was about 3 yrs, we had another dog come to our house in the country.  She showed up one cold, rainy November day.  She was small, 11 lbs wet and walked on three legs.   I was worried that she was injured but she was so wary of us it took 2 days to finally get her into the house.  We realized that she had a birth defect or was injured early on and that she was abandoned.  We adopted her and named her Gypsy.  She also lived to be 19 years old and died after accompanying me on a year-long camping trip.

I remarried and took up residence in Washington State with my new husband.  We were too busy buying a new home and were not ready to get a dog yet.

A year or so later a friend from Dale’s work had a 3-year-old dog that needed space to run, up for adoption again. They were forced to move into the city and could no longer keep ‘Lucy’.  He asked if we would take her.  After some debate, we agreed and Lucy became part of our family.  Now I have been around a lot of dogs in my lifetime but I have never dealt with an ALPHA female (lifts her leg to pee) as difficult as Lucy.  It would take a book to tell Lucy’s story so I will just say that she was the biggest challenge we have ever had.  She lived to 12 years old and is buried on your old property at Suncrest.

During the time we had Lucy we all went camping out to Roosevelt Lake for a weekend.  My daughter and her three kids joined us.  We were having a great time when a puppy wandered into our campsite.  She was about 1o months old we later found out and a cross between a Shelty ad A Husky.  We searched high and low to find her owners and eventually found the Camp Host who said someone dropped her off and left food and never came back.  She was a lovely puppy and loved having the kids play with her.  So we adopted her as well and she proved to be the nicest dog I ever had.  Her name was ‘Tasha ‘and she lived with is till she was 12 and died in her sleep a couple of years ago.

But I have always liked having two dogs.  But my husband seriously stated that our one dog, Tasha, was enough and for me not to even look at puppies.  I knew he was determined so I put away any wishes for another dog.  About a year later one day he asked me if I wanted to visit some friends not far from our place.  I did, so I went with him.  He took us into his garage and opened what looked like a dog crate and out came two black and white puppies.  He found them abandoned on the forest road to his place.  A feral mother dog had 5 puppies and couldn’t support them all so left these two.  To shorten the story my husband had been bonding with the little female all work at his coffee group and so……. we adopted another puppy.  She is a Border Collie, Newfie Cross.  That was almost ten years ago, Gracie is almost 10 and starting to show her age.

That brings us to our Community Garage Sale to raise money for Friends of the library.  While we were flogging our wares a fellow with five male puppies came down to see if anyone wanted one.  Guess what?  We are the proud and exhausted parents of Bandit, a Red Heeler, Boxer cross. He was about 2 months old and cute as a button.  That was then, this is now.  He is now almost 4 months and goes like a Bandit. And fits his name.  I am still exhausted but ever so slowly making headway in the training.  Though, I am not sure who is training who.  He is ‘partially’ potty trained but I am afraid to go to the bathroom myself in case he chews up something else besides; my shoes, Dales shoes, the kitchen table leg, paper napkins,  anything plastic, all our rugs, anything he can get from my closet, our remotes, pencils and pens and the list goes on.

Dale is not quite on board but trying valiantly.  He is the alpha hence gets obeyed more than I do.  But it’s my lap he crawls up on to go to sleep.  And so it goes.  I am sure there will be… 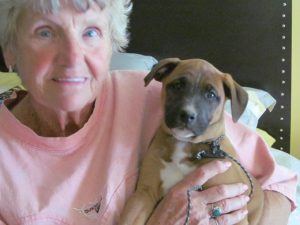 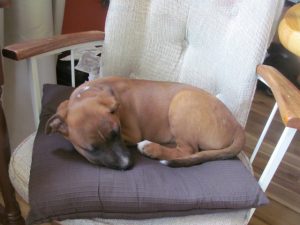 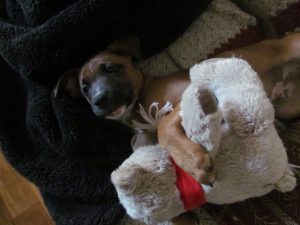 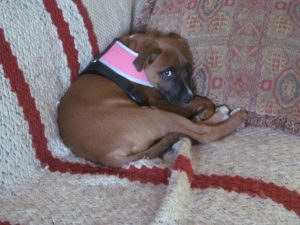 NOT ME THIS TIME