Our Summer started with a bang. All of the time we have spent in Arizona scrabbling around hot dry rocky cliffs, in spite of countless warnings, I have never seen a rattlesnake. It’s not that haven’t looked. Just nothing.

Well a week after we got home I was driving up our little road and drove by something on the road. I stopped and backed up and looked out my passenger window and there he was. My first Rattler. He wasn’t very thick but almost three feet long. He had about 10 rattles on his tail. He was undeterred in his mission which seemed to be crawl across the road into the bush.

I came home and told my husband about my encounter.

He was impressed. A couple of days went by and he was working on a deck project and walking in and out of the garage. Next thing I know he comes in to get me and takes me out the personnel door where he has killed another rattler. This one was about the same size as the one I saw but fatter. He skinned it out and put it on a board for display.

A couple of days later one of our neighbours sighted another snake down by our well and another neighbour killed one on his property.

We still don’t know why after all this time they seem to be either multiplying or simply letting themselves be seen. But one thing is for sure we all cut our tall grass down and watched where we were walking. It is now September and we haven’t sen any since. It will be interested too see what happens next spring. 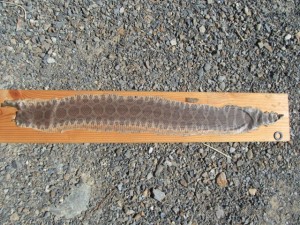 THAT WAS THEN, THIS IS NOW!