“Artists are just children who refuse to put down their crayons.”

THAT WAS THEN, THIS IS NOW!

Well, friends, I didn’t think I’d be writing my blog from home but here I am.  It’s the beginning of March and Arizona had one of the coldest and yes even snowiest winters.  We never really got out of our winter clothes.  But that isn’t the reason that we are back in Hunters.  I won’t bore you with a lot of whiney details but it went something like this.  November was pretty good at Fortuna Pond,  December was not bad at Brenda, but January found us starting to spend too much time in ERs.  Dale’s breathing was getting worse and worse.  Remember when people had breathing problems they sent them to the desert for relief?  Well, it seems they were wrong.  The staff at the hospitals said it is the worse place to be with breathing problems and that certainly seems to be the case with Dale.  Add that to a few places that are high in attitude and we are frequenting hospitals.

The final problem was in Safford where he not only had several attacks of breathlessness but managed to get a case of raging cellulitis in his left leg.  That was the last straw, we had to head for home to see our doctors.  But by then he needed oxygen to assist his breathing.  We were able to borrow a machine designed for travelling so we headed home.

The trip was made more difficult because we decided to bring our 5th wheel home as we are not likely to travel south again.  We made it with help from friends and family.  Weather conditions made driving quite perilous at times but we dodged the bullet and made it unscathed.
>Our friends and family also helped us with snow removal because it appeared that Hunters was in the middle of a bad February of snow, ice wind and freezing cold.

We had one setback after another trying to get re-settled.  First, our water was frozen and we didn’t have enough heat tape to do all our pipes. Then we couldn’t get our in-floor heating up and running.  Then Dale tells me that the clutch in the truck is going and that job is about $1000 bucks.  I don’t know how much our frequent visits to hospitals and Doctors is going to cost us but we still have a $3000 bill from last year to finish paying for.   But like all crisis’ things worked all out and we are now just waiting for 2 Drs appointments next week.  I hope that brings some good news.

A funny thing though, the more stressed I got the more I painted and the more thrift store shopping I did.  I have quite a wardrobe and lots of new artwork. I will share a self-portrait that I did when I was the most stressed, just for a laugh. 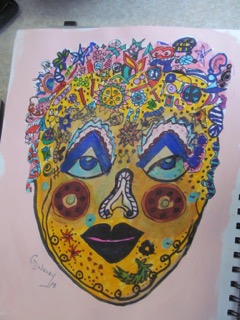 My brain under stress 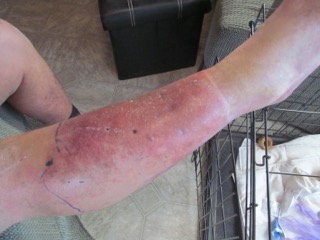