Things were going along pretty well.  We were just about finished our projects at the Walker House for our friend Jackie.  We were contacted by some friends so we reserved a site at Sunny Flats Campground and planned to move down in the afternoon of Tuesday.  But Monday night Dale was having a great deal of trouble breathing.  This condition had been gradually increasing over the past year but this week it had gotten worse.  Last night he had to sleep sitting up because whenever he laid down he couldn’t breathe.

He finally admitted that he had better address the problem so he went to see the N.P. Frances that comes to Portal a couple of times a week.  She took an EKG and was unhappy about the results.  She felt that she was not qualified to handle this so she phoned a friend who knew more about bad EKGS. After talking with another doctor she felt we should go to Willcox, about 45 miles away to the E.R.

So I packed a couple of bags, got some dog food and took off.  At the E.R. they did another EKG and got the same result.  Again the Doctor felt that he was under qualified to make a clear diagnosis .  He felt that  Dale should take the ambulance to Tucson AZ right away.  By this time I was getting  cold and tired and I was really reluctant to follow the ambulance to Tucson.  I am not good driving after dark and this would be in an unknown city.  I headed back to Paradise to Jackie’s place.

After some wrong turns in the dark I made it down the dirt roads to Paradise and stopped at Jackie’s place for a drink of wine and some de-briefing.  She was great and offered to drive me to Tucson and pick up Dale when he was discharged.  I drove the last mile home and went to bed. In spite of my stress level, my fatigue won out and I slept well.

We waited all the next day for Dale to get released but they just kept on doing more tests.  The Cardio unit didn’t seem to think anything was unusual so finally around 7 pm they told him he could go.  He never did see a Doctor, the Doc in Charge just phoned him and said nothing was wrong.

Of course it was too late for us to make the drive so he checked into a Motel down the road and called us to let us know what happened.

We set off the next morning to pick Dale up at Tucson, a two hour drive and arrived it  good time.  We all went shopping and got home about 4 in the afternoon.

So that was a whole lot of stress and energy used to end up in the same place.  His breathing improved a little and we got back to work.  We sorted out some of Jackie’s stuff to put it in a garage sale on Saturday in Rodeo. It went well and she made about $90 but more important she got rid of lots of stuff.

Later that night the wind came up and it was so strong that we actually worried that it would tip the trailer.  We were still sitting out on the point. So the next morning we moved down to Sunny Flats.  Our timing was great because our friends from Colorado had just arrived .   We always have fun with John and Bobbie.  And before we knew it our other Colorado friends Bob and Sondra also checked into their rental house in Portal.

The next few days were busy catching up and sharing a drink or two.  Every year it works out that we can celebrate Sondra, John and Dale’s April Birthdays.  And we have the good fortune to have Jackie volunteer to cook for us.  What a treat!!

Our last party was last night so we are on the road to Arizona City, the first step on our journey home. We are both looking forward to arriving home in a few days. It’s been a great winter but its time to migrate north like the birds. 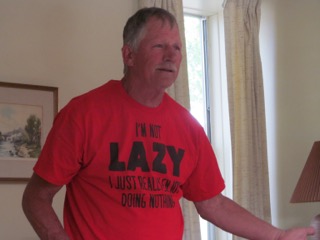 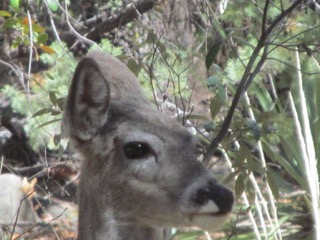 The Four Stooges and Three Dogs