We arrived at Portal expecting things to be the same as every other time we have visited but we’re surprised to find that the area had been severely flooded during the summer. A tropical storm had gotten stuck on one of the higher mountains and dropped an amazing amount of moisture into Cave Creek causing it to flood. It rampaged down the canyon causing chaos wherever it ran. At one point it was 4 feet above the little bridge at the Portal store. As a result of this flooding, all three of the local campgrounds were closed when we got there.

That wasn’t much of a problem for us because we were going up to the Walker House to do some volunteer work for our friends Jackie and Winston. Fortunately, the creek near their property, Turkey Creek, wasn’t as effected as the other areas.

We chose a nice campsite in the National Forest about a half mile from the Walker Bed and Breakfast. We got settled and went up to find out what our friends had for us to do.

We found out that the stream we built a couple of years ago had started to leak along the sides because all the rocks that Jackie put there were heavy and the dirt had settled. So with heads together they came up with a plan to shore up the liner. This plan would mean the Dale would have to build forms and pour the cement by hand.   Also Jackie’s garden needed cleaning up and a few other odds and ends.

The next day it rained so we put off starting to work and just fooled around at Portal Library and Post Office. Over the next week we worked on and off as well doing some rock hounding and painting. Gracie is busy keeping the cows out of our campsite. This is a great place for the dogs and us as well. We are just up a ways from the creek and in a forest of oak and Juniper. The only downside is that Gracie got skunked. Not a direct hit but enough. Jackie had some de-skunk spray that worked pretty good but her head is still somewhat aromatic.

My knee developed a big bump at one of the incision sites so I went down to our local traveling medical person. While I was waiting I noticed a pamphlet offering allergy testing at a nearby town. The doc ordered me some antibiotics and told me how to get an appointment for an allergy test. Since then my knee has pretty much healed up and my allergy test showed that I am allergic to: cockroaches, dust mites, feathers, molds and the tree pollen from Olive, Walnut, Willow, Juniper. Alder, and Cedar. Fortunately I show no allergy to dog hair. But there goes my Down Comforters.

I had prepared a dish for supper that required 2 hours in the oven. I didn’t have a roaster so I used one of my large pots that had a metal handle. I carefully took it out with my oven gloves and put it on top of the stove. I got a spatula to serve it on the plate and when I pushed, the pot moved and I instinctively grabbed the handle to steady it. My next 30 minutes were spent with my hand in ice water. Our friend Jackie is an EMT so Dale went down to her place and got some Silver Gel. I slept that night with a bag of ice under my pillow. The next few days I covered it with gauze and tape to keep the blisters clean and still wear Bandaids.

Meanwhile, Dale is busy making cement barriers for Jackie’s stream and I got her garden cleaned out. The Lewis’ have a new dog named Bo (for Bo jangles) who is a boxer like their existing dog Tundra, who is getting along in years, not that Bo has any respect for his elder. The other day a boy put a Christmas scarf on Tundra’s neck that had pom poms on the ends. Well, Bo was determined to claim that scarf. He did everything including standing on his head to get it. It was hilarious to watch.

But the most excitement by far was the annual Portal St. Patrick’s day parade. The parade route is about 3 short blocks and the parade it’s self is less than that. But what they lack in numbers they made up in enthusiasm, both the participants and the viewers. I was able to take everyone’s picture including the elected St. Patrick himself.   All law enforcement including border patrol participated. This exciting event was followed by a brunch prepared by the locals who fed every one who came in. All in all it was so exciting we came right home and had a nap.

It’s getting to the end of our stay in portal but we have places to go and people to see so I expect to leave by the end of the week. 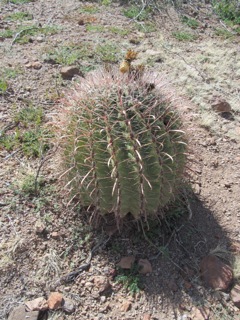 You’re Not Going to Believe This!!