… Before Hector could speak he was handcuffed and on his way to jail charged with 2nd-degree murder.   How could this be happening?

In a cell, he couldn’t believe what had just happened.  He knew that he didn’t kill his son but here he was in jail.  As it turned out later an autopsy proved him right.  The baby died of Sudden Infant Death Syndrome (SIDS) but by then it was too late. His wife still thought that Hector had somehow had something to do with her son’s death.   Hector had now lost everything that mattered to him; his wonderful wife and his baby son.  And from that day forward things just got worse and worse for Hector.

*After Thanksgiving, I continued to visit Hector.  I learned that the days he could fish, he would have fish and beans for all three meals.  All other days he would go into his stash of can goods.  He never went hungry.  From time to time he would go to another location on the canals and try fishing there.  The last time he camped about two miles away and he caught an 11 pound Catfish.  He took a picture of it and then cut it all up into meal-sized portions and put them in his cooler. He always managed to let me know where he was staying so I could go and see him. He had also had great respect for my husband Dale and always said to give Dale his regards.

After the loss of his son and wife he started spiralling down into to a clinical depression.  Nothing mattered to him anymore,  He started drinking heavily and ended selling his two houses.  He needed the money to pay his medical bills that resulted from 4 suicide attempts.  For some crazy reason, this man just couldn’t seem to kill himself no matter how hard he tried.  His first attempt he drove his truck into a moving train.  He broke 17 bones in his body and ended in the hospital with tubes everywhere.  By this time he was homeless and staying with relatives.  After his long recovery from that attempt, he went back to drinking and planning his next attempt.  He was slowly going out of his mind.

The next time his depression took hold of him he found an old abandoned building that was a home for thousands of spiders. After drinking himself into a stupor he passed out in the building and was bit countless times by the spiders.  His body was swollen up terribly when he woke once again in the hospital.  He was nicknamed “Spiderman” by the staff.  And he started another recovery.  By this time he was seeing Psychiatrists for counselling.

Here is a drawing of me done by Hector. 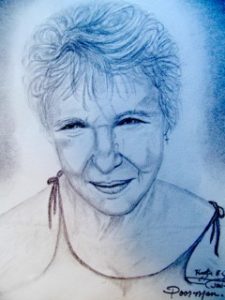 WHAT’S NEW WITH US