I am not ready to do a blog about the last couple of months but hope to get that done soon.

In the meantime, I am including a story I wrote starting 2 years ago.  This is a true account of a man we met in Yuma and got to know very well.  I found this ma’s story was like a magnet to me and I felt compelled to write it.  This was all done with his cooperation, help and absolute permission. The names are real as he requested.  If you read all the installments I hope you find it as interesting as I did.  I welcome any and all comments.  this is basically the introduction and I will try to file an installment every couple of weeks.
More to come…

The Story of Hector (Poor Man)

I am telling this story as accurately as I can by taking notes while Hector himself told it to me.  Much of it I can’t prove but some records were shown to me.  I will indicate when I have verified the information.

I met Hector when were camping at Fortuna Pond near Yuma.  We had just gotten settled in our usual spot when we were greeted by a fellow nearby.  He was living in a Ford van parked a little way down the pond.

This man called poor-man looked to be in his sixties, with longish salt and pepper hair, a round face and a broad smile  He was very friendly and welcoming We struck up a conversation which led to a fine sit down with him and a buddy later that same evening.  At one point Hector announced a little proudly that he had been homeless for 23 years.  The conversation turned to stories of Hector’s life. I found his story fascinating.  He was very honest about the trouble he had caused, and the  bad decisions he had made in the past that had hurt himself and his whole family   But he was also a victim of circumstance.

That night I started to think about doing a blog about our meeting and his story.   So the next morning I approached Hector and asked him to join us for Thanksgiving dinner next Thursday.

I brought up the idea of doing a blog about him and asked his permission to write it and include pictures  He wholeheartedly agreed and suggested that I come over later and he would fill in some of the spots he missed the night before. Well, that turned into many more discussions.

This is the result of those meetings.

It is not a pretty story or a happy one, but it does present a different perspective of people who are poor and  homeless we hear about and possibly see every day.  People who made different choices than we have and suffer the consequences.  And people who are trapped into choices that lead them down paths that create havoc  in their lives and the lives those they love.  I hope this will encourage people to with-hold judgement the next time they view homelessness.

Hector was born in Buckeye Arizona to1956 to his mother Cecoria Berrellez Ji’menez and his father Felix Tejho Jimenez who eventually parented 7 boys and 4 girls.  He was named Hector Berrellez Ji’menez. He found it was difficult growing up in a large family that had limited income. He was in the middle of all brothers  His mother worked very hard to provide a good home for her family  Her husband Felix was a WW2 vet and worked very hard and was a good father and husband.  Unfortunately, he became an alcoholic.  In spite of his alcoholism, he loved his children and they loved him.

But there were too many in the family and crowding and poverty resulted in the sisters and brothers fighting each other,  They started hitting each other with any weapon they could find; bricks, hammers, irons and other deadly weapons.  This behavior contributed to the development of a wild life that had serious consequences later on.

Watch for my next installment… 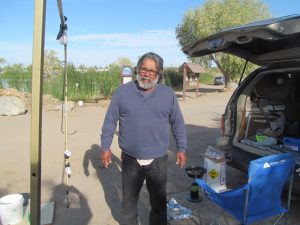