Well, I have a little one for you.  We finally made it out of Hunters.  We had to get both our doctors’ approval and then packed what we could figure out.  This year is totally different because we bought a new 5th wheel to leave down in Quartzite so we just had to pull our UTV n it’s trailer.  This made our trip much quicker and less stressful.  Not to mention more legal since more than one trailer behind a truck is illegal in Washington State.

We were pretty loaded down by the time we left but we got a break with the weather most of the trip.

We picked up our 5th wheel yesterday and made all the necessary changes but were too tired to head out again.  But we were fine this morning so we left for Yuma where we camp at Fortuna Pond.

I was riding in the trailer as usual and it was a beautiful hot day.  We only had  70 some miles to go so I thought I’d check my email. We had gone about 20 miles when I heard a loud noise coming from the bedroom.  I looked in and saw the blind on the bedroom window above the bed was flapping like crazy up against the screen.  It took a minute to realize that we had lost our window.  I grabbed my phone and called Dale to tell him to stop.  It went to his voice mail.  I dropped the phone and ran upstairs and  pushed the blinds up and took out the screen.  I saw that the window had come off at the bottom and had swung up and was barely attached..  I crawled up on the bed and reached out and grabbed it and slowly pulled it in.  The trucks were going by and sucking it back out.  I gradually brought it down and pulled the bar through the hole that pulls it in and out.  Great!! now what?  I had to hang on for dear life so it wouldn’t flap open again.  I tried to bend the bar to hold it closed but it wouldn’t budge.

There I was lying on the bed holding the window for all I was worth and no way to get Dale to stop.  If I let go to get my phone the window was a goner and beside that I couldn’t see the traffic and didn’t want to take a chance on it flying into another vehicle.  There was a sweat shirt lying on the bed so I stuffed it through the gap in the window in hopes that Dale would see it and stop.  No such luck.  I knew that we had another 45 miles to go with no natural stops on the way.  So I settled in and braced by arm on a pillow and counted the miles going by.  I kept sending” you have to stop and pee” messages to Dale but that didn’t work either. 40 miles later, with a sore arm and very little patience left we pulled into Fortuna Pond.  Dale wasn’t as sympathetic as I thought he should have been but I guess he was figuring out how he was going to fix it.

Not bad for my first week, 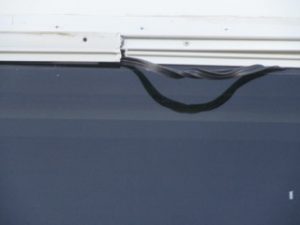 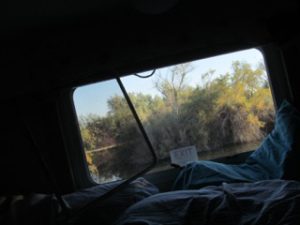 ON THE MEND AT LAST