We have been doing a lot of exploring in the area.  The guys went on a crystal hunting trip with one of the locals who live here year-round.  They had fun but the “crystals”  turned out to be large squares of quartzite, beautiful but not the real thing.

They also went on a fishing trip and did catch a few small fish.  But the boat captain caught a large halibut which he gave to us.  We had a fish feed that night.  We cooked it two ways, coated with egg and cornmeal and fried, and secondly we put a large piece on tin foil and added garlic, season salt and lots of butter. Then wrapped it up and cooked it on the barbecue.  Both turned out great.

Another fun thing we did was stop at a place on the highway we saw.  It was an Artist’s place named Rosario.  The front entrance had several very big sculptures of Mayan faces and Mexican ancients.  The artist was a quiet, modest, somewhat spiritual  man who seemed quite happy to show us around though, he knew that we couldn’t afford his  $2,000 price tag.  He told us that this was a 30 year accumulation of his work . He also painted, made jewelry and worked with Ironwood.  He had another entrance that was huge slabs of rock balanced on each other. He told us that to his amazement they withstood an earthquake that they had several years ago. We went back several times after that and could always see something we didn’t notice before.

We had a big wind storm here yesterday as the result of a storm on the Pacific side.   The sand was blowing across the highway and we could barely see in front of us.  Fortunately our camp is down a hill so the sand missed us. 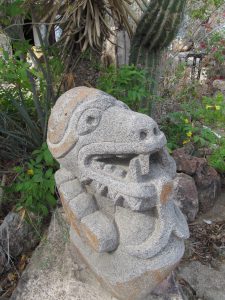 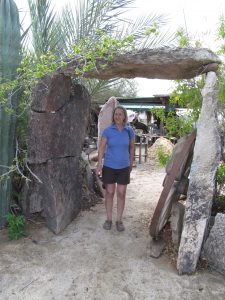 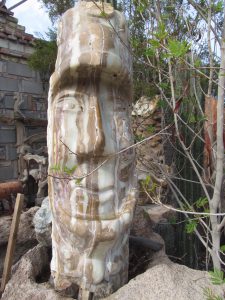 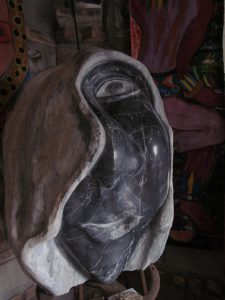