It’s that time again.  We have had a much different couple of months in that we have been alone most of the time.  Usually we are busy with other folks but instead, we have been exploring new places.

When we left Queen Valley, east of Phoenix, we decided to try a place outside Florence, just an hour away.  This little city exists mainly as a site for a number of prisons, but it also has a lot of history.  I spent a day exploring some of the historical buildings and local sites.

In my travels, I saw a poster for a local Winery called The Windmill.  It said that every Wednesday they sponsored a “Paint and Pour” event.  It cost $35 a person to come and get instructions on how to paint a funky picture.  One also gets a free drink of wine and all the supplies needed and the company of other enthusiasts.  I approached Dale and he was willing to go with me.  So the next Wednesday, off we went to paint our little hearts out.  The winery is apparently a famous place for weddings.  It appears to be an old farm property that has been remodelled with a man-made lake with gardens and special structures for the brides and grooms.  It also includes a horse-drawn carriage to take them and their guests to various events.  It was all quite entertaining.

Our subject for the art lesson was a funny portrait of cow.  We were all set up outside on a side lawn that was surrounded by both wild and domestic wildlife.  We were joined by chirping birds, roosters cock-a-doodling and donkeys braying.  Our instructors were a mother and daughter team who kept us busy.  We had our wine beside us and were provided with paint shirts,  It was great fun.

I was finished my painting in 15 minutes so I ventured out to explore.  I met the current Bride and Groom as they entered the carriage to go to another venue.  When the carriage man returned he was idle so he offered me a tour of the place.  I happily accepted and left the painters to their fun.  He dropped me off back at the same place and I went to see the progress.  I have wondered for some time about doing something similar at one of our local wineries so I spent some time asking the instructors privately how they got theirs up and running.  They were very forthcoming with advice.  I am including the paintings that Dale and I did so you can judge our work. 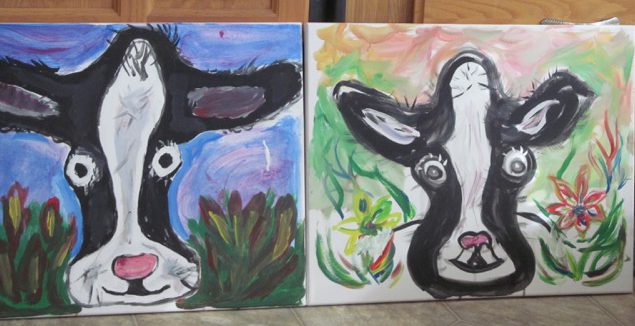 You can decide which painting is mine and which one is Dale’s.

There was lots of UTV’ing in the area we were camped and we took advantage of that often.  Of course one day I decided to go by myself and I got lost (big surprise).  Fortunately, I am so used to being lost I never panic.  I just wander around hoping to see some landmark to set me in the right direction.  That was what happened here so I found my way back before Dale got too worried.  I did see some beautiful country though!!

From Florence, we headed over to Burro Creek, a place of wilderness between Wickenburg and Kingman.  We camped about a mile up the Signal Creek Road where we are now.  The day we arrived, we had just got settled when a young couple with two kids, about 3 and 5 yrs old, pulled in next to us.

We introduced ourselves and told them about the natural hot spring not far from us and they were really interested.  So we volunteered to take them all over to see them.  The road is quite challenging so we took the four of them and their dog in the truck with us.  They all saw this as a great adventure and we had a lot of fun.  We drove as far as we could and walked the rest of the way.  These kids were seasoned travellers so they soldiered right along.  When we reached the spring there were 3 teenage boys sitting with their feet dangling in the water.  The little kids stripped off all their clothes and jumped in.  They had a ball.  The boys had walked in from the highway and were camped there overnight.  We had a heck of a time getting the kids out of the water.  They wanted to stay with the boys but it was rapidly getting dark so we hurried back to the truck and made our bumpy way home.   The thanked us effusively the next day and went on their way.

This is the canyon of the hot springs.  A pipe was put in years ago and the water runs into the wash.  Every year someone dams it up until the monsoons wash it out again.

We did a lot of rockhounding, finding some nice stuff and meeting some local folks but wanted to move on to Safford for fire agate.  But on the last morning at Burro Creek we woke up to burros outside our camp.  A nice goodbye. 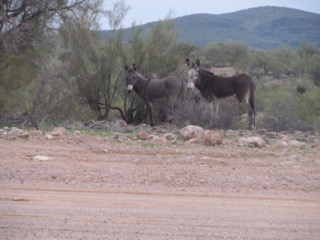 I have been doing a lot of painting s I am including some of my recent art.  I hope you find something you enjoy. 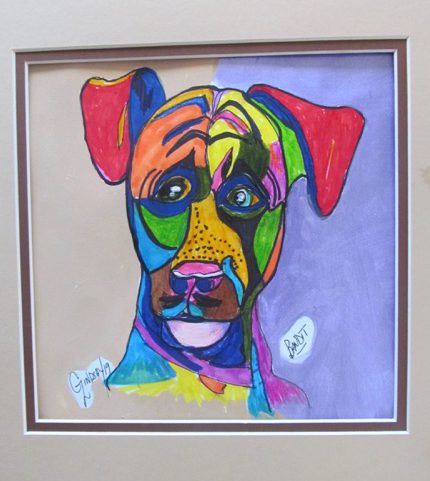 This is our new dog Bandit. 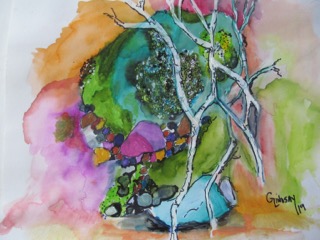 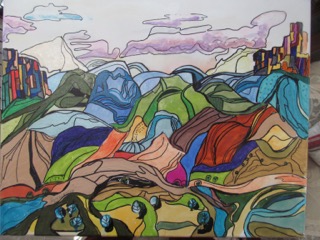 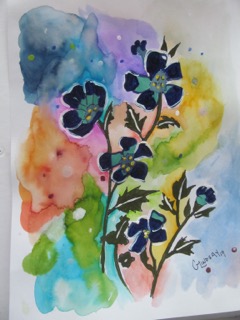 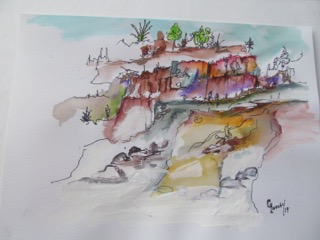