Years ago I wrote a ”LAMENT ON TECHNOLOGY” which told of my problems with remotes controls.  If I had only known then that it was just a drop in the bucket, I would have run screaming into the woods.

Here I sit in my trailer out in the Arizona desert with 3 computers and an iPad and they are either crashed or I can’t figure out how to work them.  Granted I am electronically impaired but I have survived this long with the help of my husband and children and grandchildren.  But I am confused, frustrated angry at myself and others and ready to throw in the towel and become a hermit.

It all started a couple of years ago when my family bought me an Apple (iMac) computer.  I was excited to learn a new machine because I had struggled on a slow PC up till then.

My son would connect to my computer remotely and guided me on the steps to becoming proficient.  When it comes to me being proficient in anything, that ship has sailed.  But he taught me some of the basics and I slowly learned enough to be happy.

I should have known that I am not responsible enough to own such an expensive toy.  Two years into my ownership I flooded my keyboard with a glass of water.  After much self-recrimination, I took into an Apple store and received the sad news that my computer was doomed.   But they were willing to fix it for a mere $1200. I think not!!!  But for the same money, I could buy a new MacBook Air  This included them downloading all my data.  After discussing it with my husband he suggested that I go for it since I really needed something to do all my finances and writing and  I was doing quite well on the Apple.

I bit the bullet and went for it. Meanwhile, Dale had to get a new PC because his computer was having troubles.

Things went well for about a year until one night I was merrily typing along and once again I got my keyboard wet.  Wait!! Don’t judge me because I did enough judging myself.  I cursed and wailed and yelled at myself for days. I was ready to give computers altogether and go back to snail mail.  I would write by hand and use an adding machine to do my banking.  There was no punishment adequate for me.

I finally calmed down and realized that there is no postal delivery from the middle of the desert so I had better think again.  My son-in-law generously offered to send me an iPad that he wasn’t using if he could get it to me. I gave him a local shipping address and accepted with thanks.

I also found out that I could get a PC through Amazon using my Air Miles.  I ordered one that would only cost me $12. Even if I could use the iPad, Dale could use a back-up if his PC failed. It arrived in a week and I tried to learn how to use it.  Emphasis is on ‘tried’.   Shortly after the iPad arrived.  I couldn’t even figure how to turn it on.

So here I sit with now 4 computers, none of which I can understand.  Don’t you just love technology?

I knew that I would need to find an Apple Store to get the data removed from my now fatally injured MacBook Air (for $100).

That turned out to be a lot harder than I imagined; those stores are only in big cities, which I hate, and almost always hidden within a large mall but I did find one in Chandler (part of Phoenix).  We took a day to battle our way through awful traffic and getting lost a couple of times to finally locate the store.  It was like a beehive.  People in apple-red jackets behind desks with a sign behind them announcing ‘The Genius Bar’. Customers hopping from desk to table to desk again, all talking loudly and seeming to know what they were doing.  There was no reception desk, nowhere to check in and everyone talking in what was like a foreign language to me.  There were updates, gigabytes, product numbers, serial numbers, passwords, Apple Care this, high tech wifi that.  We stood stupefied for a few minutes when a red jacket came and asked if he could help us.  We told him our problem and he frowned as he mentioned yet again that liquid damage was BAD, VERY BAD.  I wanted to crawl under a desk but of course, they were all busy.  I explained that all I wanted was to have the computer looked at to see if my data could be downloaded onto a disk (I knew what that was).

“Oh dear,” he says, “Unfortunately we are so far behind we couldn’t look at it until next month”

“Well, could I just leave it here and you could get to when you could?”

“Unfortunately, we are not set up of that kind of thing,” he says remorsefully.

Great, I think.  What are you all doing here then?

But he then suggested that we take it to Tucson because they should have more time. He gave us a number to call for an appointment.

Since we were going to Arizona City to visit friends we decided to make a further trip while we were there. A few days later I phoned for an appointment and was told that,

After Arizona City, we went to Queen Valley which gave us access to yet another Apple Store, the one in Scottsdale, the other side of Phoenix.  This was the original store where I bought my MacBook.  I phoned for an appointment and, ‘Glory Be’ I got one in two days.  More traffic and with help from our GPS we were in.  By this time Dale was advocating for a MacBook repair because I was so frustrated using his PC. They said they would send it away and it would cost between $350 and $700 to fix.  By that time we were so exhausted that we agreed, hoping the cost would be the former. Of course, it turned out to be the latter.  But we picked it up in a week and it seems to be working fine. The coup de gras was when they asked if we would like to buy an iPhone while we were there.  What do you think?

On a much lighter note, we are now in the Black Hills near Safford and Dale is having a ball digging for fire agate.  On the way there we were contacted by McKenzie, the daughter of a good friend in Washington.  She is a firefighter by trade these days and was enjoying her downtime travelling in Arizona for the winter. She and her companion Brian were just a few miles ahead of us on the road and wanted to join us in the Black Hills.  We met them at the next Walmart and led them up to our campsite,  She had her dog Banjo with her who was a cross between a Great Pyrenees and a Husky but he looks more like big yellow lab.  He was a great dog and after a few choice words from Gracie, they got along fine.  These 2 young people were both wildfire fighters so they were used to roughing it.  They had a tent but wanted to sleep on the bed of our UTV trailer with just  their sleeping bags.  They really seemed to enjoy it even though the temp drops into the 40’s at night.  It was great fun having them.

I am still doing a lot of art, finding new ways of expressing my love of nature.  Here are a few examples I just finished. 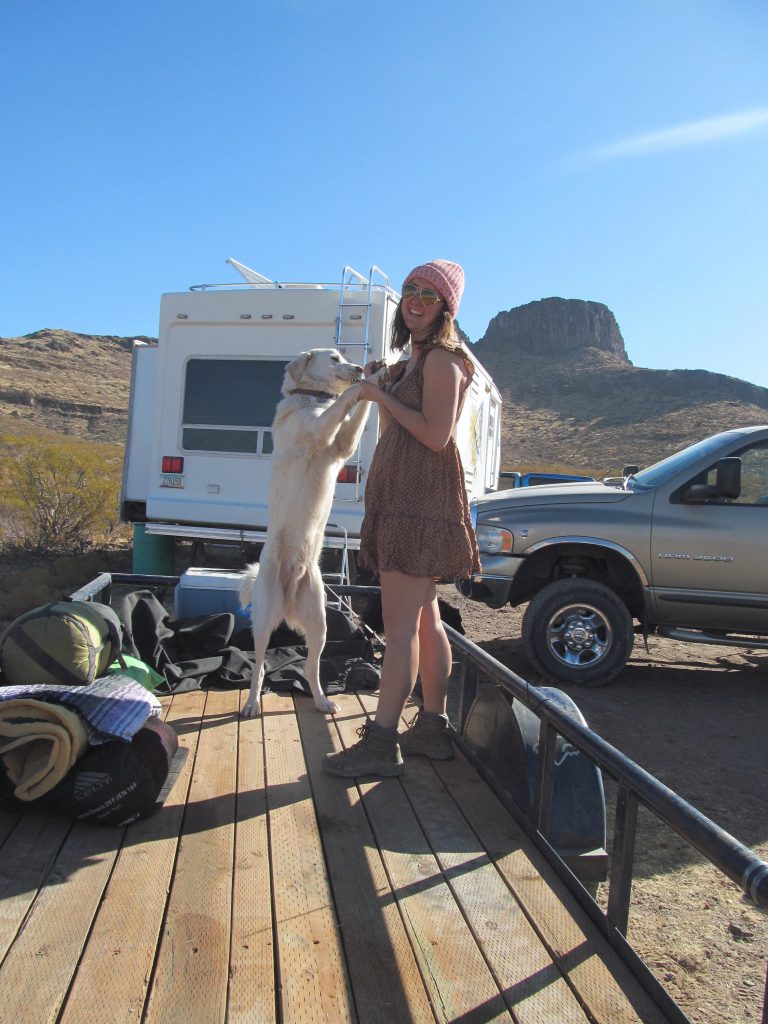 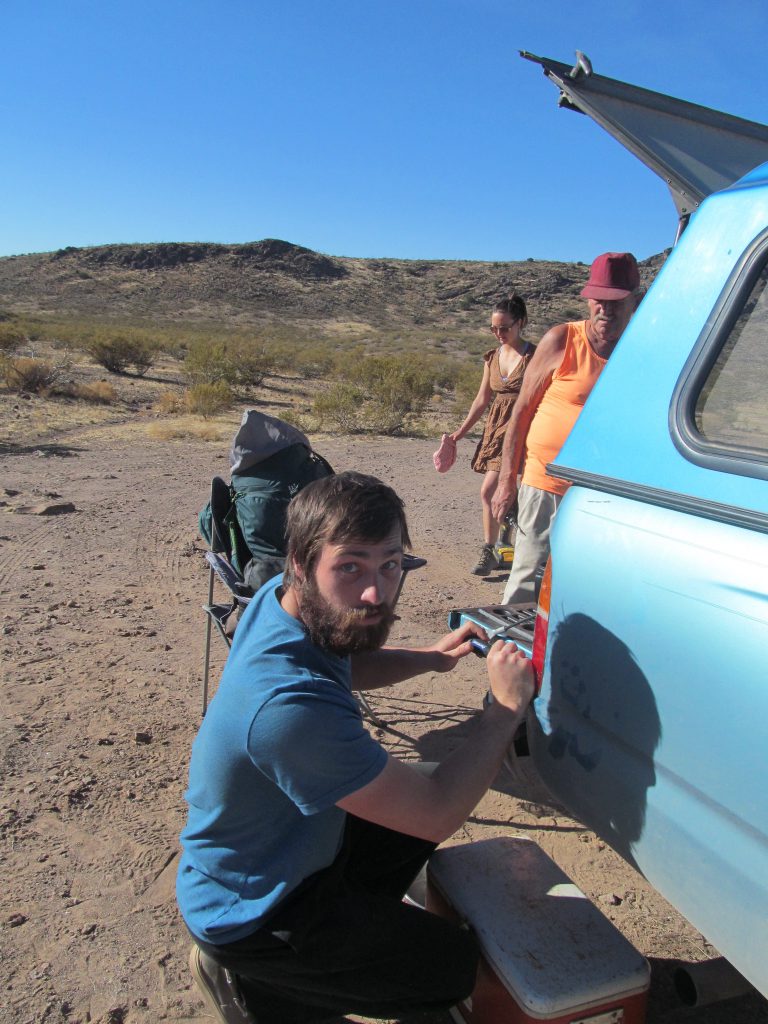 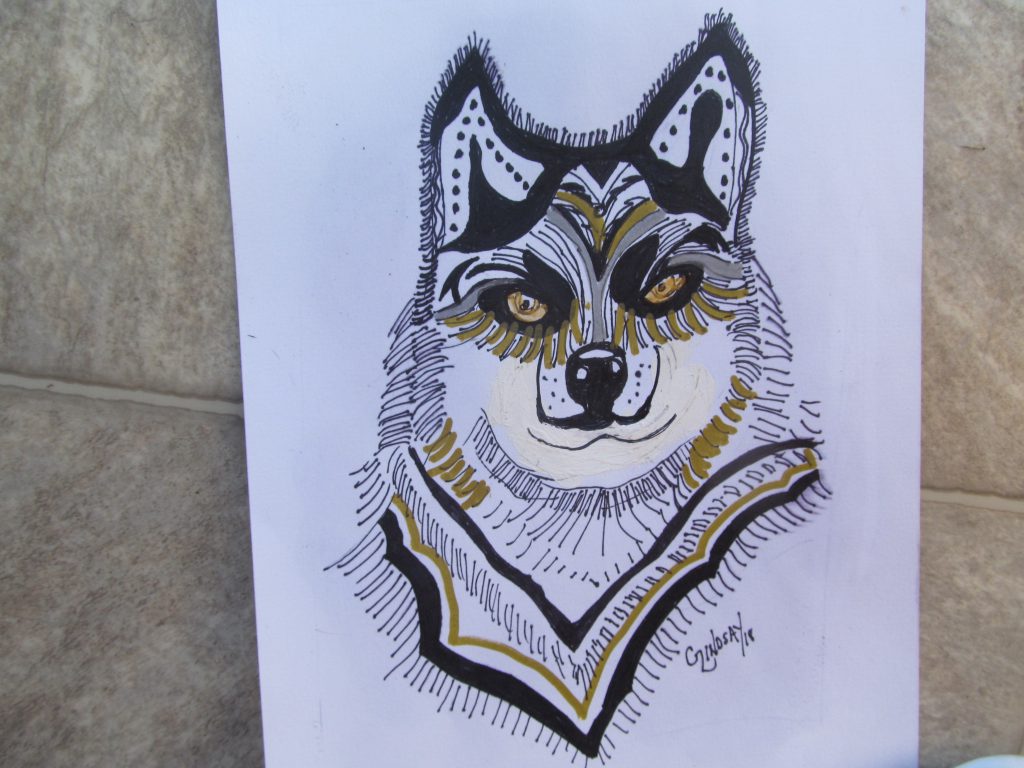 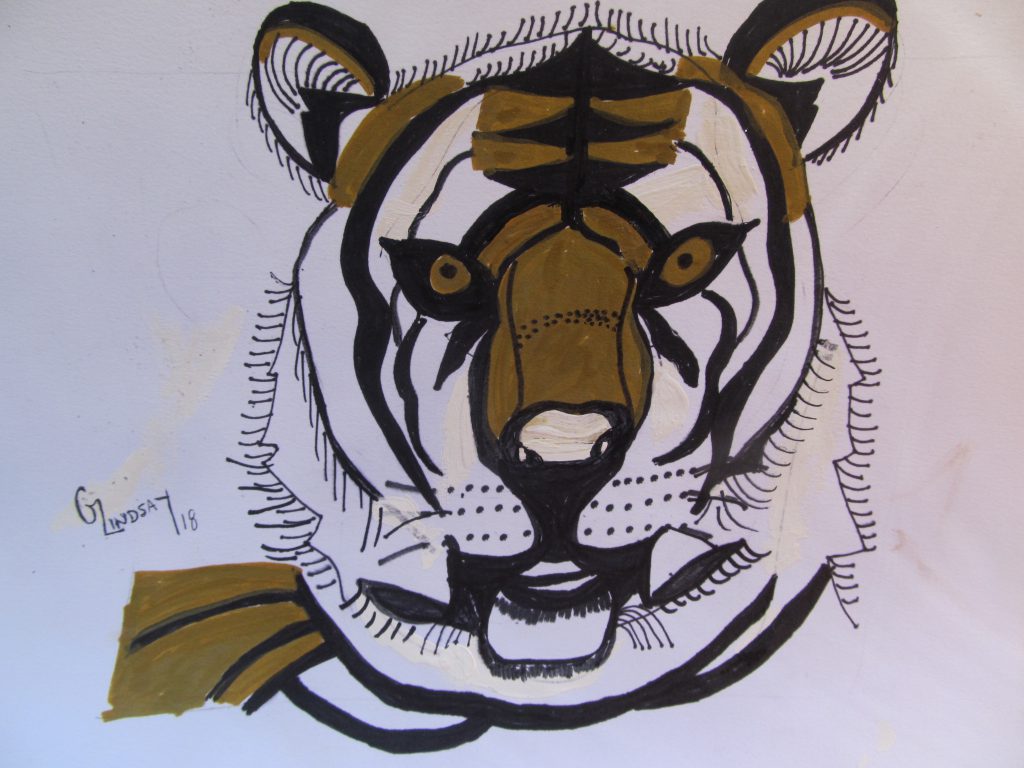 Adventures at the Monument