We survived Christmas and New Year’s, but only because we all dragged out our winter coats, gloves and yes, even boots. New Year’s Day it SNOWED. Admittedly it was only an inch, but come on now, this is the Arizona desert. We were all either amazed or bummed out until we checked the weather in our respective hometowns.

But the birds remain active here. We all have feeders out and they are busy. In fact, yesterday we gad a Gila Woodpecker come to our hummingbird feeder and proceed to suck out enough sugar water that he made it a regular stop.

But apart from that all is well and it promises to start warming up on Jan 4th. This is good since we are cooking another turkey for a number of friends here in the park. Other friends of ours have arrived so now we are 6 and that seems to be the magic number for hilarity. We have been playing cards leading to all sorts of drinking, yelling, laughing, swearing and general chaos. We have also had some great meals together. This morning Joanne cooked us all biscuits and gravy. It seems that Rick and Diane have never tried them and for the most part scorned the idea of a meal made from a biscuit with gravy. But one taste and they were converted.

Dale and I went to Buckeye the other day to take Babe for some expensive repairs and to visit Walmart. When we were walking in the parking lot I saw a poster on a truck advertizing a Wolf Rescue place near there. I went home and googled the site, phoned and got an appointment for the six of us the next day.

So today we went the 60 or so miles to the Eagle Tail Mountain Wolf Sanctuary. We were greeted by Kelly and his wife who own and operate this non-profit rescue sanctuary. Currently they have about 40 wolf/dog rescues on site. Some are loose and form the welcoming committee with a rowdy bunch of small dogs all barking at the same time. One of the roaming wolves is Mystic who has been there a couple of years along with a lovely female who with some coaxing let us pet them . They followed us through the tour.

Kelly told us about the sanctuary which they took over from a woman who died of cancer. He has had as many as 150 animals at one time but many have died of old age. Kelly has expanded the existing cages to give the remaining dogs more room. The animals are caged because of the number of alphas who will fight with each other. All are neutered to avoid reproduction of animals more animals who will also needed to be housed and fed.   There is a never-ending supply of crossbred dog/wolves that end up homeless. Kelly and his wife are supporting this facility on a shoestring and doing it very well indeed. Groups of five pens are joined in the middle by an octagon cement house that Kelly uses for feeding and cleaning their pens. The pens are roomy and all but one have a couple of animals living together.

We were very fortunate to be able to enter the pens and interact with the wolves. Kelly supplied dog treats, which were much appreciated. The animals are all happy and very healthy and welcomed us with lots of attention.

All in all we had a wonderful time and promised to come again. Dale and I are planning to spend some time in the future volunteering at the facility. I showed them my paintings and promised to send them some copies.

I hope you enjoy the pictures and consider sending them a donation to help with the food. 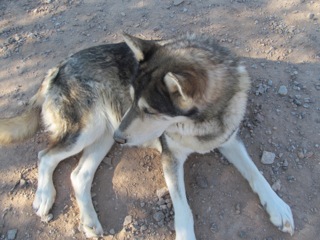 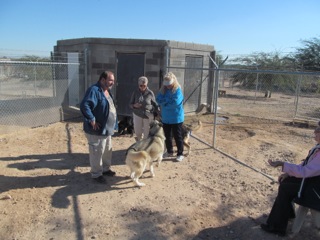 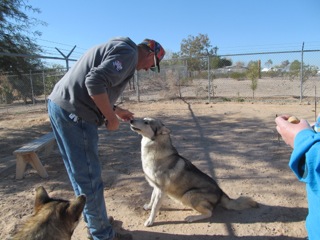 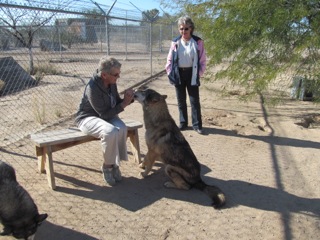 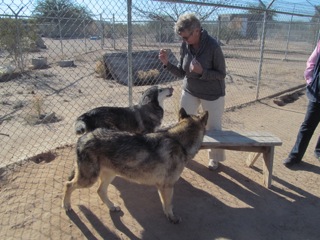 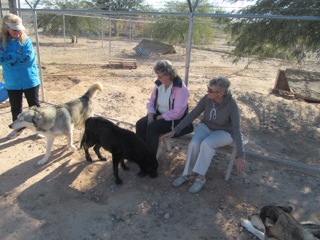 AND SO IT STARTS…